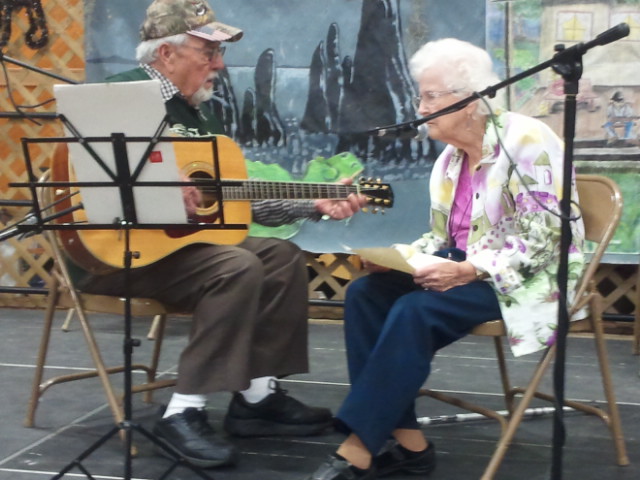 August 21, 2015 Maylee at Beyond Gumbo Interesting Stories and People One comment

When Jane turned 90-years-old this past year, I couldn’t believe it. She’s active, sharp, witty; still sings and plays her dulcimer. She is a member of the Lagnaippe Dulcimer Society. 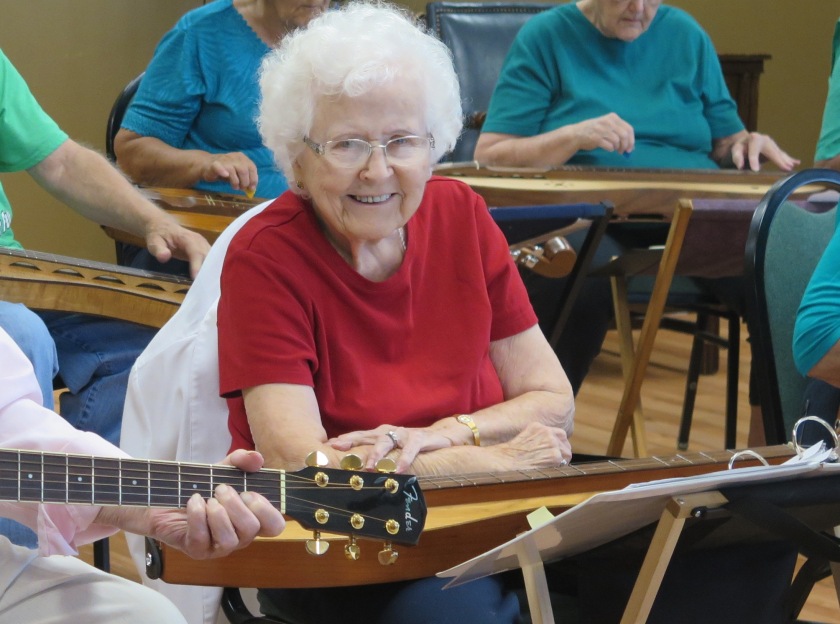 I believe that Jane is the matriarch of the Lagniappe club–I don’t think we have any other 90-year-old dulcimer players in our club. Jane has been a member of our Lagniappe Dulcimer Society since the beginning in 1998. She took my Leisure Class at LSU to learn to play the dulcimer in the fall of 1997 and joined when we founded our dulcimer organization the following spring. Jane continues to come to dulcimer meetings where we jam and learn new tunes. Today Jane, in red blouse, joined members of the Lagniappe Dulcimer society at a gig at Jane’s retirement center. 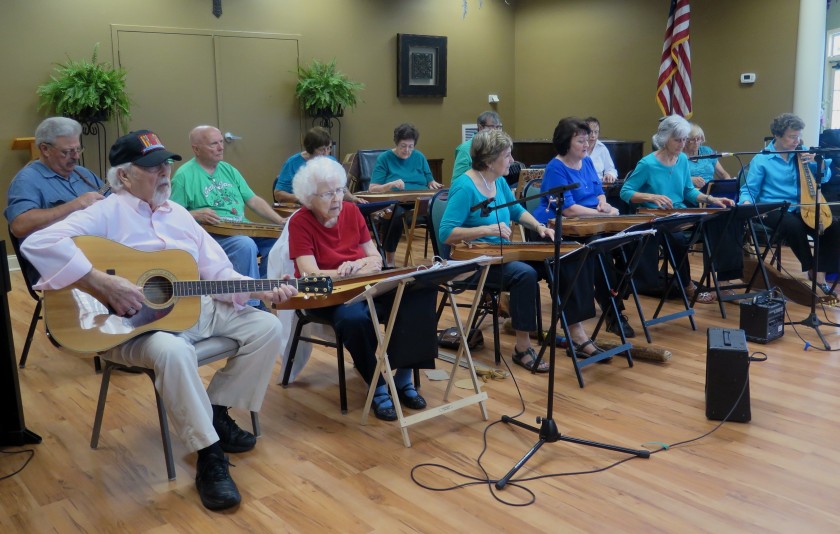 I’ve enjoyed many events through the years with Jane and her family–such as attending her 50th wedding anniversary. Jane’s grandson went to high school in the same class with my step-son and they were both members of a rock band which occasionally practiced at our home. We’ve kept up on family events as our families have aged.

Jane has attended most of our dulcimer fetes in March. Here she is with Peggy Broussard in 2013.

This photo was taken at our first dulcimer fete in 2002. Jane won a beautiful print by Cheryl Clark in our dulcimer raffle. 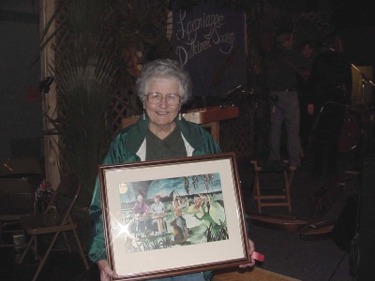 A true Louisiana native, Jane wouldn’t miss eating crawfish. We cook the mud bugs to give out-of-state visitors a taste of this crustacean at our fetes. Jane joins in peeling and eating the crawfish at an early Lagniappe fete with her husband seated next to her. 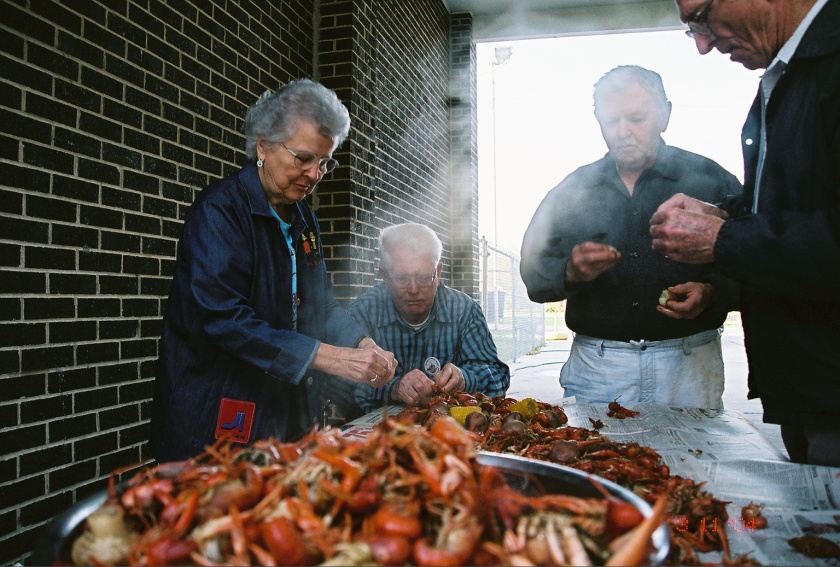 Jane is a writer and poet. Her sense of humor shows and I remember a silly skit she and her daughter created and performed one of our dulcimer fetes. They dressed up in wigs, Hawaiian Luau outfits and  sang and danced down the isles. Jane has a beautiful voice and loves to sing, especially with A.J. Kent. The two formed a duet when their spouses passed away. Here they are playing and singing at the fete in 2013.

We’ve enjoyed Jane’s poetry and humor which occasionally is directed at dulcimer members. At an early gig, the guys were driving along in one car and talking–you will see what happened. Here is Jane’s memory of the event in a poem she wrote.

Two friends of ours are music men,
They play their instruments with zest and then, grin.
The dulcimer, harmonica, bowed psaltery, jaw harp and more
Make you happy and smiling galore.

Our Lagniappe Dulcimer Society, as we are known,
Started out for a “Gig” at an out-of-town home.
We play for schools, festivals, Senior groups and such
And like to get fed, but will take tips–just a touch.

Our men followed we ladies in their tan pick-up truck
Made a wrong turn and ran out of luck.
Some poor woman they followed to her home
Drove into her driveway, and she all alone.

They were astonished, and she was too.
The wrong car they had followed BALLY-HOO!
They quickly turned around and got on the road
“Out of here, out of here, before we explode!”

We ladies turned around to find our lost guys
We could tell something happened by the look of their eyes.
The moral of this nonsense is for their wives
Please go with them and protect their lives.

They’re sweet and we love them and don’t want to nag,
Evidently, they can’t find their way out of a paper bag!

Members such Jane have made our club meaningful and fun over the years. Her smile and good nature is something we should all have more of! 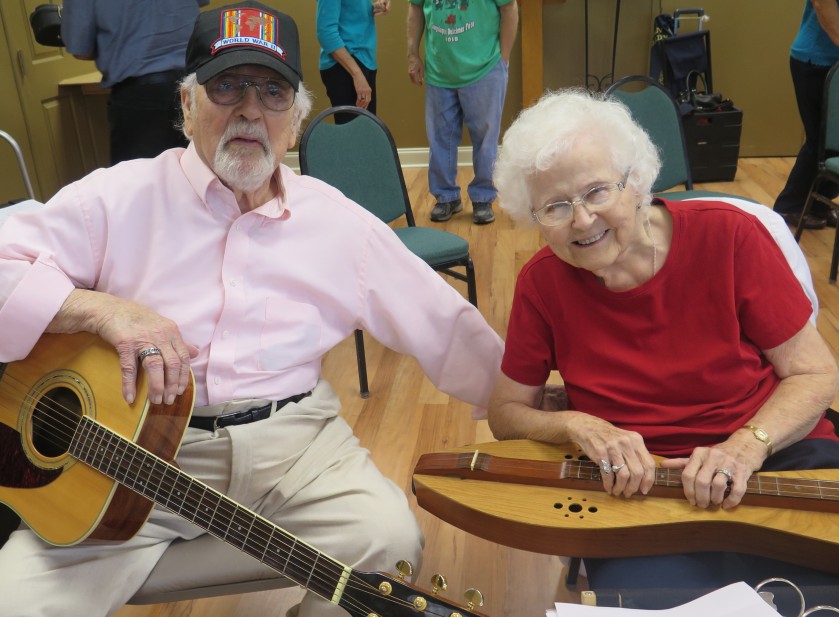