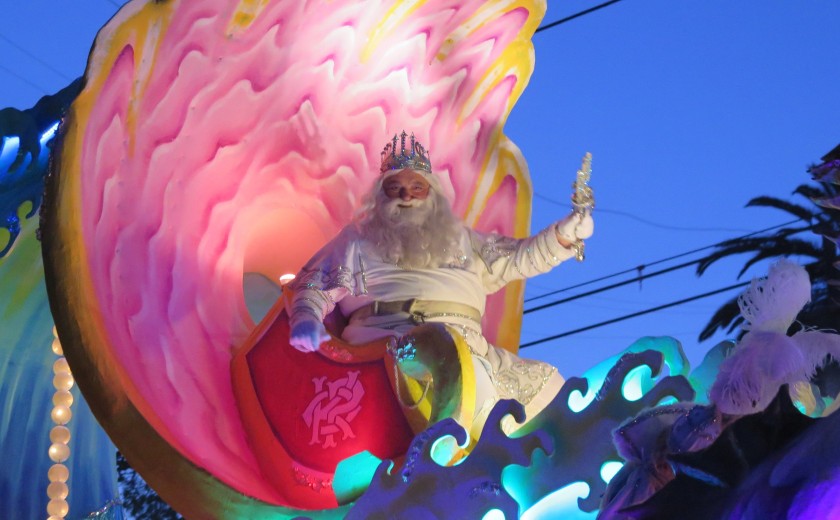 Mardi Gras comes early this year–February 9, 2016. This is carnival time in south Louisiana — parades, pageantry, costumes, balls, parties, king cakes. We play many of the traditional Mardi Gras songs on the dulcimer and I credit the tablature for the music to Paul Andry of Mandeville, Louisiana.

Mardi Gras, which is French for “Fat Tuesday” is celebrated on the day before “Ash Wednesday” which marks the beginning of the Lent season. Fat Tuesday is the last day of eating rich foods and partying before the six weeks of ritual fasting leading to Easter. In New Orleans the Mardi Gras carnival season actually encompasses the entire period from January 6th or the Twelfth Night (the last night of Christmas or feast of Epiphany) to Ash Wednesday. It revolves around secret organizations or krewes and their costumed kings and queens, courts and balls and culminates in extensive parades. Here is the king of the krewe of Proteus at their parade in New Orleans.

For most of us, Mardi Gras means being a bystander at one of the many elaborate parades in New Orleans, the suburbs or surrounding cities. Here movie producer and director, Quentin Teratino, is riding on a float of Proteus and is enjoying throwing beads to the crowds.

And the Captain (chairman of the secret organization) of the Krewe of Proteus is heading along St. Charles Avenue straight towards me as I snapped photos.

Actually he was going to greet the young lady standing next to me–a law partner of her husband.

We usually take in one or more of the parades–where a seemingly endless supply of beads are thrown. I enjoy the pageantry of masked horseman which usually ride at the beginning of the parades.

Over the years a number of songs have become identified with “Mardi Gras”. These tunes include “Mardi Gras Mambo,” “They All Ask for You,”, “Iko, Iko.” “Go the the Mardi Gras” by Professor Longhair, “Second Line,” “If Ever I Cease to Love,” “When the Saints Go Marching In,” “Liza Jane” and  “Carnival Time” by Al Johnson.

We play several of these traditional Mardi Gras songs in our Lagniappe Dulcimer Society club. The transcriptions for the dulcimer and tablature originated with Paul Andry. I have included here his music and tablature, with permission, for the songs we play: “Second Line,” “If Ever I Cease to Love” and “Iko Iko.”

Paul Andry is from Mandeville, Louisiana, and is past President of the Bayou Dulcimer Club. His club hosted the highly successful Bayou Dulcimer Festival for ten years. Paul has since retired and moved with his wive, Dee, to the Highlands, North Carolina.

Paul began playing the dulcimer about the same time as I did. He first discovered the dulcimer while vacationing in Mountain View, Arkansas. In 1990, Paul taught three fellow church members to play – that was the start of Louisiana’s Bayou Dulcimer Club. Paul is founding member of the original Les Amis string band along with Denise Guillory and Barbara Aymé. Here is Les Amis playing at our first Lagniappe Dulcimer Fete.

Paul quickly excelled at playing the dulcimer, placing in several Southeast Regional Music Competitions shortly after beginning playing including the individual and ensemble categories. He also won the Texas State Dulcimer Championship in 1994.

Paul was already proficient and skilled at playing the piano and it didn’t take long for him to master the mountain dulcimer. In childhood  Paul was selected to study ragtime piano with Al Streeman; a retired New Orleans Big Band Leader. Adapting music for the dulcimer was easy for Paul with his New Orleans’ ragtime influences as well as blues, Cajun and popular music interest. He seemed to have an “ear” for making complex and pleasing dulcimer transcriptions.

Paul has developed several distinctive playing styles including a fingerpicking style which allows for dulcimer renditions of melodic and expressive ballads and songs. No dulcimer/guitar picks in this playing style. Paul uses a draw-pluck technique where his thumb brushes from the bass towards melody string, then his thumb and fingers pluck other notes and chords. “If Ever I Cease To Love” is an example of this style. Paul is equally adapt at strumming either a straight strum or blues and jazz syncopated rhythmic style. “Second Line” uses this strumming style.

Teaching at Snowbird and other places

Paul is an active teacher as well as performer and dulcimer arranger. For twenty-two years, Paul has conducted a special dulcimer week at Snowbird Mountain Lodge in Robbinsville, North Carolina. Here he shows his unique teaching style at one of these sessions.

Paul has participated in dulcimer workshops and festivals all over the country. For the past three years he has taught courses at the Dulcimer Jamboree at Western Carolina University and at Dulcimerville in Black Mountain, North Carolina. Paul has been an instructor at several or our Lagniappe Dulcimer Fetes including here in 2015.

Look for Paul to continue as an active teacher and performer in the future. Paul has published four books of dulcimer tablature (they are still for sale) and is currently working on a fifth book and compact disk recording.

Our Connection to Paul Andry

When I purchased my first mountain dulcimer at a filling station in North Carolina back in about 1990, I couldn’t find anyone in Baton Rouge who played the dulcimer. I heard that several dulcimer players resided in the Covington-Mandeville area. The group hosted a dulcimer festival each spring with dulcimer music, concerts and instruction. And so I traveled to Bayou Dulcimer Club’s second dulcimer festival at Pontchartrain State Park and met Paul Andry and Denise Guillory. Here is (left to right) Paul, Denise and her husband, Don–who provided sound equipment at our fetes for many years–at a recent Lagniappe fete.

When we formed our Baton Rouge group, one of our club members, Millard Chaney, also belonged to the Bayou Dulcimer Club. Millard brought us Paul’s tablature and taught us how to play the songs. All of the Mardi Gras music that we play came from Paul and was taught to us by Millard.

In a New Olreans parade, the brass band is part of the “First Line” or the main parading group. The “Second Line” is a a group of individuals who dance and parade along behind the main procession often twirling a parasol or handkerchief in the air. They may be part of a wedding party, just following along behind a jazz funeral procession, or dancing behind a Mardi Gras parade. This song is typical of ones played by the brass bands the during these processions. Here’s our own Mardi Gras parade “Second Line” at a Lagniappe Fete.

And a Lagniappe member reveler. 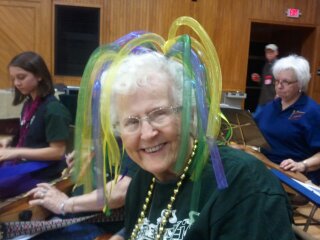 “If Ever I Cease to Love” is the “official” anthem of the Krewe of Rex whose parade is on Fat Tuesday morning. The song was written by George Leybourne in 1871. (He also wrote “The Daring Young Man on the Flying Trapeze”.) The song was sung by opera singer, Lydia Thompson, in the burlesque adaptation of Offenbach’s operetta Bluebeard.

When the Russian Grand Duke, Alexei Romanov, visited New York, he heard the song and was fascinated by both the song and Lydia Thompson. He discovered that Lydia was touring the United States coming to New Orleans. So the Grand Duke of Russia changed plans and came to New Orleans. The city heard he was coming and organized a massive parade a mile long during the Rex Krewe celebrations. Every band played the song when passing in front of the viewing stand with the Grand Duke standing the entire time. Well, the Grand Duke, perhaps not prepared for the city’s royal reception and possibly slightly embarrassed, skipped Lydia’s performance. Anyway, the song “stuck” and has been played by the  Krewe of Rex ever since then. Here is the King of Rex at a more recent parade. 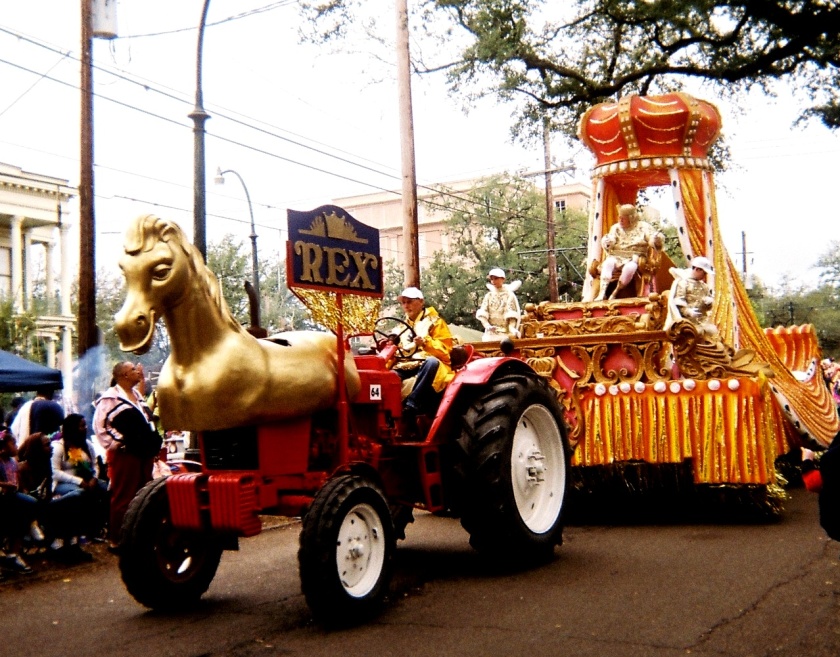 The song has slap-stick or nonsense lyrics typical of a burlesque song. But the melody is beautiful, melodic. Paul dose a great job with this dulcimer tablature.

The first verse of the lyrics are here. Look on the internet (see references) for the complete set of lyrics.

In a house, in a square, in a quadrant
In a street, in a lane, in a road
Turn to the left, on the right hand
You see there my true love’s abode
I go there a courting and cooing
To my love, like a dove
And swearing on my bended knee
If I ever cease to love
May sheep heads grow on apple trees.

“Iko, Iko” is a song about the Mardi Indians. And what are Mardi Gras Indians?  The Mardi Gras Indians are comprised of groups of residents, called tribes, in the African-American communities of New Orleans’s inner city. The groups are very secret, headed by a chief and have paraded for well over a century. There are at least 38 active tribes today.

The parade routes often seem spontaneous to a bystander and do not follow an established route. The flagboy refers to one of the members who carries the tribe’s flag. 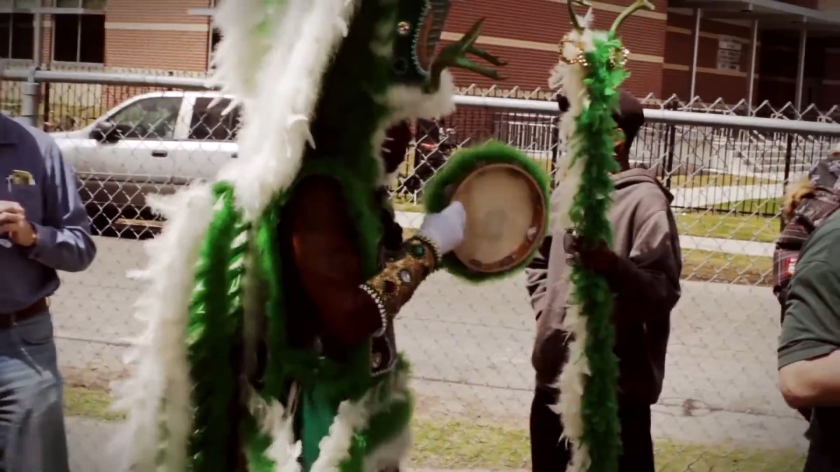 “Iko, Iko” or ““Chock-a-mo” or “Jock-a-mo” was written by James “Sugar Boy” Crawford  who phonetically wrote down two chants that he heard the tribes sing. The song tells of the clash of two rival Indian tribes. Sugar Boy and his Cane Cutters recorded the song in 1953 but it did not do well nationally. The Dixie Cups sang the song impromptu at a recording session using ash trays for percussion. Their producers were recording the song; it became a number one hit in 1965. The recording of this song is on a You-Tube video–search for “Dixie Cups.”

Here is Paul Andry’s dulcimer tablature. It is a also a syncopated song.

The lyrics and many You-tube videos of these songs are easily assailable on the internet so I haven’t included them here; this post is long enough. I suggest listening to the songs on the internet to learn the songs and syncopated rhythms. Then get out your dulcimer and play the song along with the tablature. Enjoy some of our New Orleans traditional music. And a King Cake! 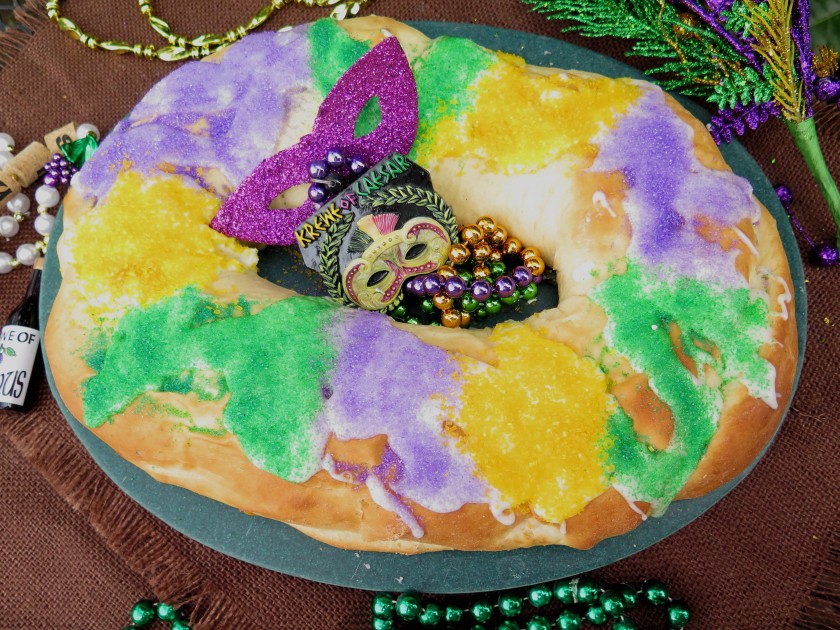