I love October and autumn. The weather is cool and crisp; the leaves change colors and the produce markets are full of pumpkins, gourds and apples. With Halloween around the corner, I’m reminded of one of my favorite songs to play on the dulcimer, “Leatherwing Bat.” It’s a mournful song in a minor key. I’m tuning my dulcimer to DAC to play it. Perfect for Halloween.

On a recent trip to upstate New York, we stopped at “The Apple Farm” to pick apples. The ripe apples were literally falling to the ground around us and it didn’t take long for us to collect enough to carry home. 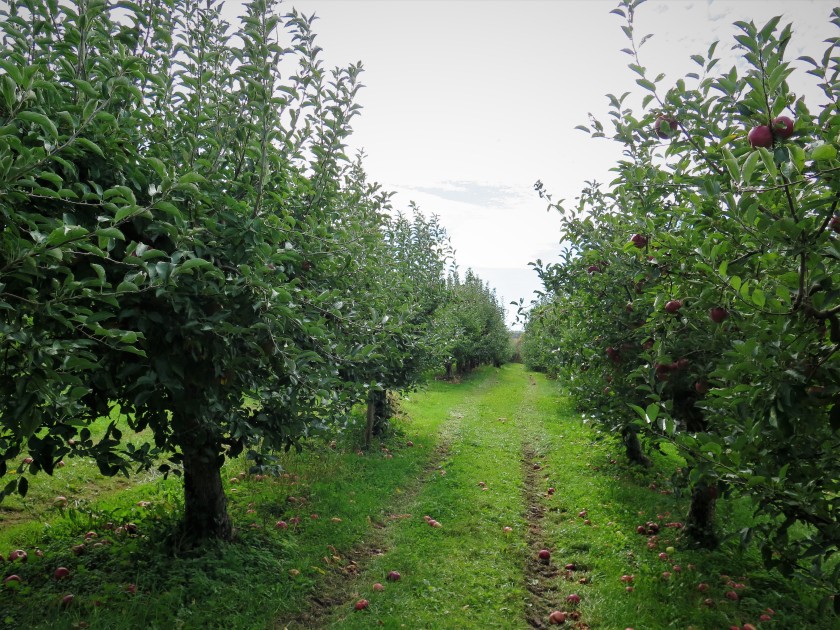 As we left the farm, we stopped to look at a field where pumpkins had been assembled. A very large hawk or owl glided and circled overhead. I don’t imagine the predator was interested in the pumpkins, there must have been other small prey close by. Somehow the scene reminded me of the song, “The Leatherwing Bat.”

Leatherwing Bat is an old English folk song about a series of birds who all have something to say about love and courtship in a lyrical manner. When set to a minor key all their stories seem sad and mournful.

The song is a very old English folk tune. The song and variants were included in Frances James Child’s collections. Child made several extensive collections of traditional English and Scottish Ballads in the 1800’s. Child also collected folks songs in the South and attempted to associate them with their English derivatives. The American version is probably derived from Child’s Ballad #26 or “The Three Ravens” according to the book, “Southern Mountain Folks Songs.”

Many folk singers have recorded this song including Peter Paul & Mary and Pete Seeger. Needless to say, there are many versions of both the tune and lyrics.

I first heard Maureen Sellers sing “Leatherwing Bat” at a Bayou Dulcimer Festival some years ago. I don’t remember what version she played. My version is combined from several sources.

There are several approaches to playing a song in a minor key on the mountain dulcimer. The most common minor key is played from the first fret to the eighth fret.  Placing a capo at the first fret moves the scale up one fret on the melody string. Now the sequence of frets is in the correct arrangement to play a minor tune.

Another approach is to re-tune the dulcimer and lower the melody string one note so the dulcimer is tuned to DAC. Now the first fret becomes D and the scale is D minor.

This is the traditional way to play minor tunes on the mountain dulcimer. Although re-tuning takes practice, this opens up many new possibilities for playing the dulcimer. You may ask why it is necessary to re-tune? The reason is so the middle and bass strings will harmonize with the melody string in the new tuning.

Changing from DAD to DAC requires that only that the melody string be re-tuned to one note lower. When tuned properly, it will sound the same as the bass string fretted at the sixth fret. (This “C” on the bass string is shown by the red letter in the diagram.) It is easiest to use a tuner to change the melody string. Go slowly; the string just needs to be lowered one note. Perhaps this is just a half a turn of the tuning peg, depending on the type of your tuning peg.

My version of Leatherwing Bat is slightly different from most other versions. Usually the verse and chorus tune are the same melody. I changed the chorus slightly to make it different sound from the verse, and held the third to the last measure, to make it sound more mournful. I also added an introduction with slides in the third measure to add to the ambiance of the tune. 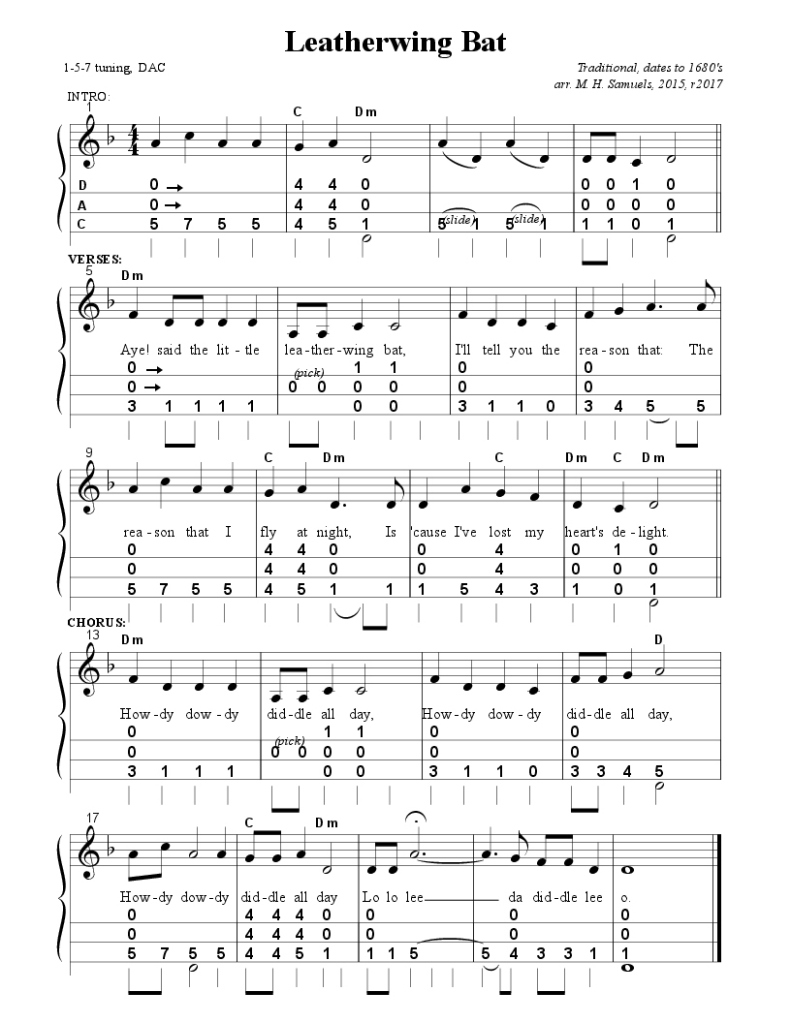 Here are the lyrics:

Here are PDF Versions of the song and lyrics:

Here we are in an upstate New York apple orchard on a balmy October day. 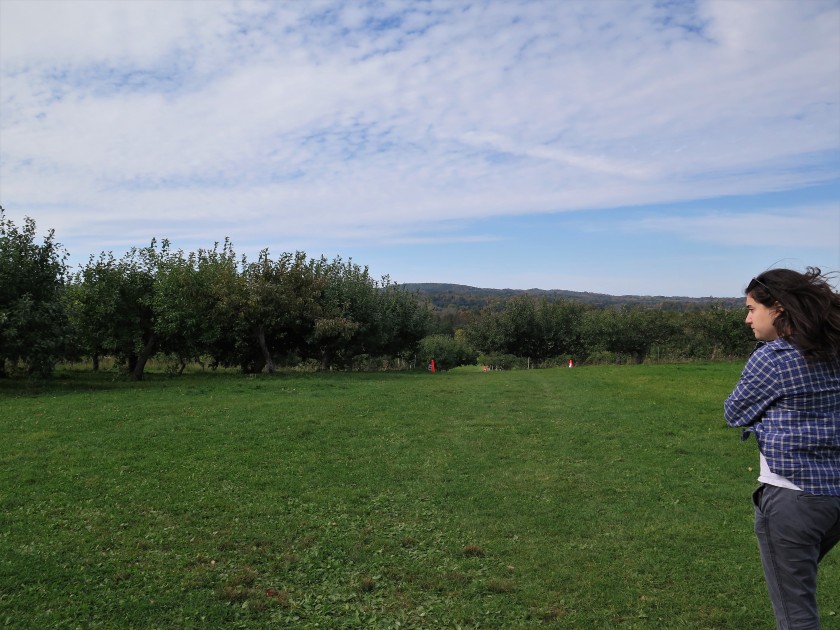