September 20, 2018 Maylee at Beyond Gumbo Tunes and Techniques Leave a comment

When my children were very young, I often played my dulcimer at bedtime to rock them to sleep. It was a creative and relaxing outlet — I even wrote a lullaby. Over the years, I’ve sort of forgotten about these tunes. But, now I have a new grandchild and a renewed interest in lullabies and a trip to Germany reminded me of some of these tunes.  Two of my favorites are: “Twinkle, Twinkle Little Star” and “Wynken, Blynken and Nod.” And these simple songs can become quite beautiful and soothing with easy embellishments and harmonies. Mystical adventures at bedtime! 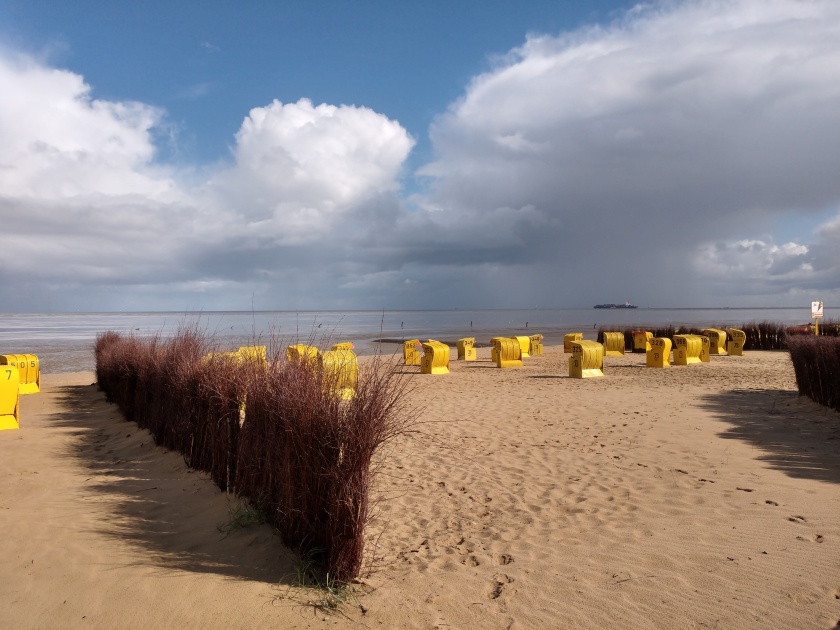 Here’s the North Sea at Cuxhaven, Germany. The town is at the mouth of the Elbe River and you can see a huge transport ship in the distance in the photo above making it’s way from Hamburg to the North Sea and it’s destination. The sea is shallow; at low tide you can walk across the sea floor for an hour or more to an island in the distance. The North Sea reminded me of the lullaby, “Whyken, Blynken and Nod.” 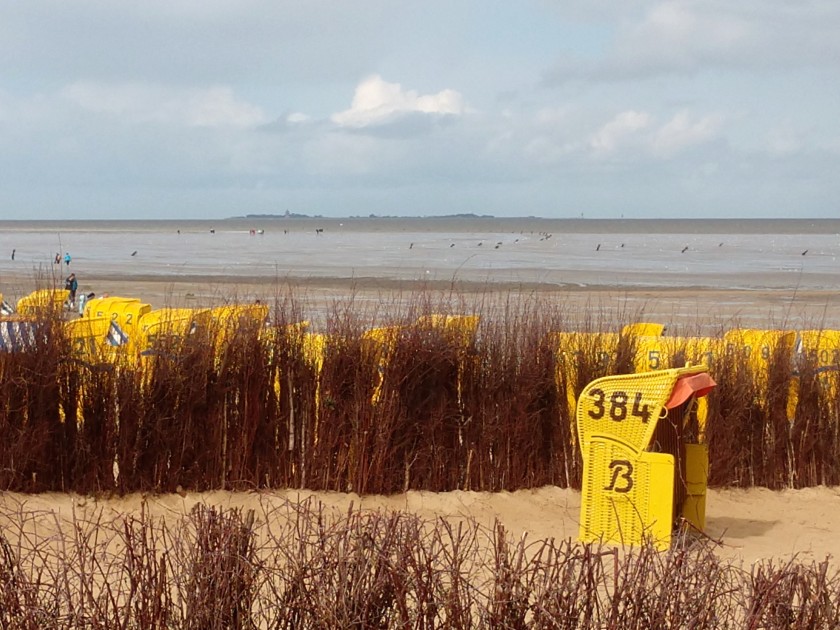 “Wynken, Blynken and Nod” is a very simple rhythmic poem and song. I have fond memories of my mother singing it when we were young. The poem was written in 1889 by an American writer and poet, Eugene Field (1850 – 1895), and set to music in the late 1800’s.  The bedtime poem tells the story of three children or fishermen who went sailing and fishing among the stars. The boat or wooden shoe is the children’s trundle bed and the fishermen represent the sleepy children’s blinking eyes and nodding head.

I’m pretty sure that my mother truncated some of the verses — I only remember the first and last one. She set the poem to her own melody — at least it is different from the ones I’ve heard.  I’ve included her original melody and along with my tab at the end of this blog.

The melody is waltz in time, a very rocking rhythm.  On the dulcimer, it is really easiest just to play the harmony and sing the song. The melody is rather low for some folks to sing. So you can easily play the tab on either a standard dulcimer, baritone (tuned to AEA or GDG) or a ginger dulcimer to change the key and match your singing voice. The tab is given at the end of the post.

Wynken, Blynken, and Nod one night
Sailed off in a wooden shoe —
Sailed on a river of crystal light,
Into a sea of dew.
“Where are you going, and what do you wish?”
The old moon asked the three.
“We have come to fish for the herring fish
That live in this beautiful sea;
Nets of silver and gold have we!”
Said Wynken, Blynken, and Nod.

The old moon laughed and sang a song,
As they rocked in the wooden shoe,
And the wind that sped them all night long
Ruffled the waves of dew.
The little stars were the herring fish
That lived in that beautiful sea —
“Now cast your nets wherever you wish —
Never afraid are we”;
So cried the stars to the fishermen three:
Wynken, Blynken, and Nod.

All night long their nets they threw
To the stars in the twinkling foam —
Then down from the skies came the wooden shoe,
Bringing the fishermen home;
‘Twas all so pretty a sail
it seemed
As if it could not be,
And some folks thought ’twas a dream they’d dreamed
Of sailing that beautiful sea —
But I shall name you the fishermen three:
Wynken, Blynken, and Nod.

Wynken and Blynken are two little eyes,
And Nod is a little head,
And the wooden shoe that sailed the skies
Is a wee one’s trundle-bed,
So shut your eyes while mother sings
Of wonderful sights that be,
And you shall see the beautiful things
As you rock in the misty sea,
Where the old shoe rocked the fishermen three:
Wynken, Blynken, and Nod.

We all know this song, but did you know that it has additional verses. There are 5 stanzas in the poem which was written by Englishwoman, Jane Taylor, and published in 1806 in “Rhymes for the Nursery” a collection of poems by Jane Taylor and her sister Ann. The melody  is a French song.

Twinkle, twinkle, little star,
How I wonder what you are!
Up above the world so high,
Like a diamond in the sky.

When this blazing sun is gone,
When he nothing shines upon,
Then you show your little light,
Twinkle, twinkle, through the night.

Then the traveller in the dark
Thanks you for your tiny spark;
He could not see where to go,
If you did not twinkle so.

In the dark blue sky you keep,
And often through my curtains peep,
For you never shut your eye
Till the sun is in the sky.

As your bright and tiny spark
Lights the traveller in the dark,
Though I know not what you are,
Twinkle, twinkle, little star.

This simple lullaby can be turned into a beautiful arrangement with a little imagination. Jerry Rockwell is one of the first accomplished first dulcimer players that I ever met. We both were attending a week long mountain dulcimer workshop at Appalachian State College. I remember taking several of his classes (I’m sure he doesn’t) and was very impressed with his accomplished and original playing.

Jerry wrote a 4-part arrangement of “Twinkle, Twinkle Little Star” with some interesting harmonies and variations on the melody. With his permission, I have adapted it so one person can play the song. I can sit and play this arrangement for hours. It will lull any infant to sleep and calm and relax the dulcimer player, too. 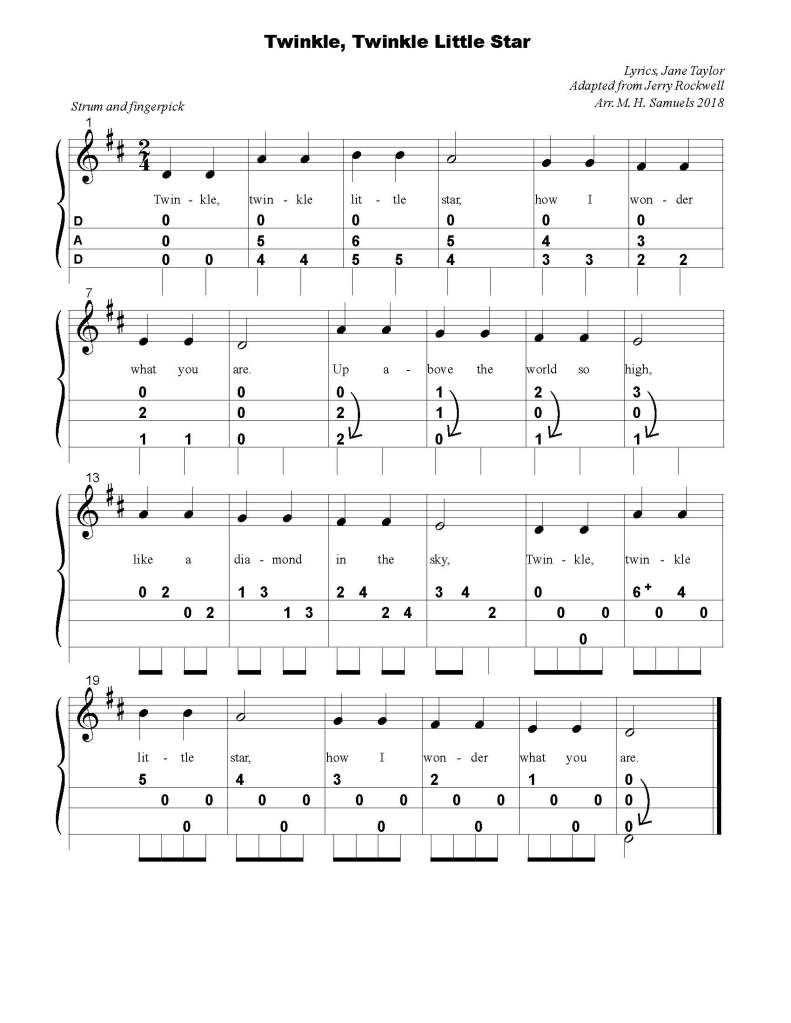 Jerry writes is own compositions and adapts traditional tunes as well. He’s just finished a new album which includes eight tracks of meditative electric and acoustic mountain dulcimer. Seven are his own compositions and one is a traditional tune – the Irish song/air Star of the County Down. The album is entitled, “Starlight Variations”.  Jerry also offers some great instructional materials.  If you ever have a chance to go to his workshop, “Boot Camp for Dulcimer Players”, don’t miss it.  Jerry also builds dulcimers — excellent quality, too. These can be found on his WEB site.

In addition, you can become a patron of Jerry’s work which gives access to his newsletter and music lessons.

Here’s my arrangement for this lullaby. Flat pick the tab and fill in the held notes with some of your own. Strum at some places in the song.

Here’s the harmony to the song. Fingerpick the tab in a very rocking rhythm, emphasizing the first beat of every other measure, and sing the song.

And page 2 of the harmony. 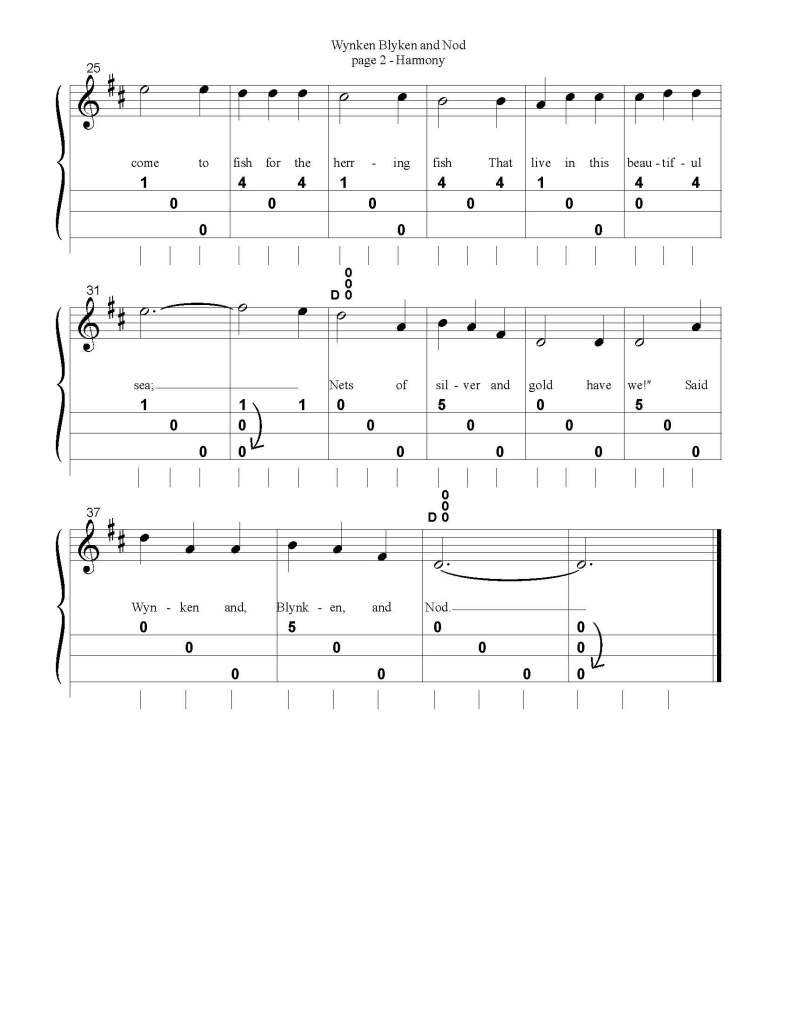 If you would like a PDF version of either of these songs, please send me a message, the files appear to large to easily upload onto this blog post. And enjoy playing these songs on the dulcimer and rocking your infant or yourself to sleep!