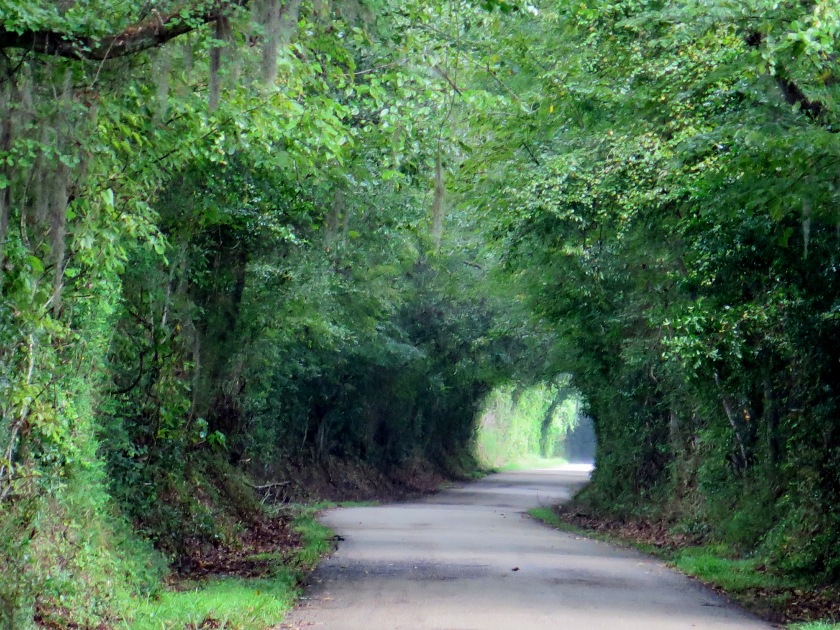 Our dulcimer musical festival theme this year is “Dulcimers on the Delta.” Nothing exemplifies the music of the Louisiana Delta more than the songs of Huddie Ledbetter (c 1888 – 1949), also known as Lead Belly.  American folk music collector, John Lomax, recorded Lead Belly’s singing in 1933 while Lead Belly was incarcerated for attempted murder in the Louisiana State Penitentiary at Angola, Louisiana. Lomax’s efforts to record and preserve the talented Lead Belly and his extensive music collection gives us a glimpse into the world of Afro-American music from the Louisiana Delta at the turn of the century. Some of the songs credited to Lead Belly include “Good Night Irene,” “The Midnight Special,” Where Did You Sleep Last Night (In The Pines)” and “Rock Island Line.”  I wrote a dulcimer arrangement of one of Lead Belly’s songs, “Green Corn,” included at the end of this post. 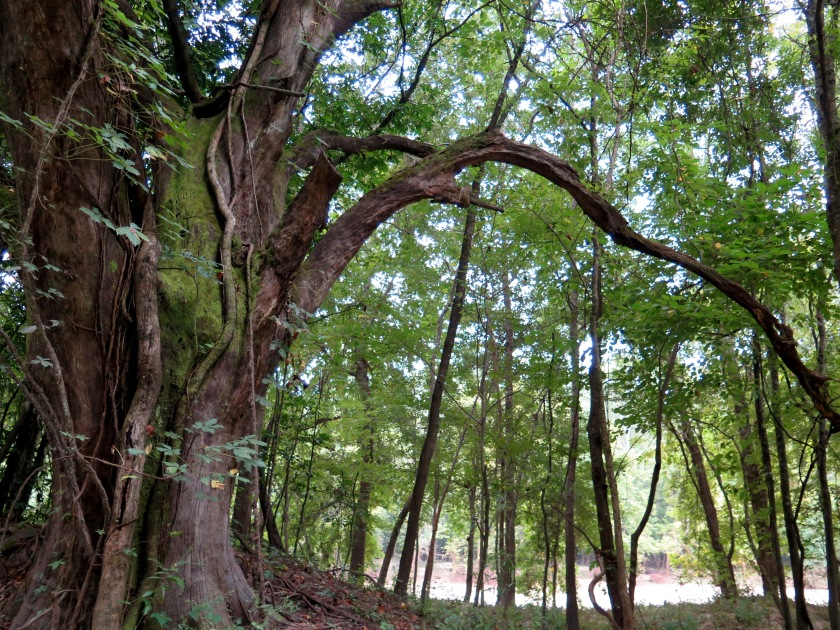 This is Bayou Sara which runs by the Angola Prison located in a remote area of Louisiana. The cover photo shows a small road which also takes you to Angola. Once an thriving cotton growing area, the landscape is now filled with overgrown shrubbery and massive trees which cover the roads with a canopy. The cotton industry is gone from this area but the massive Angola Prison is still here, a self-contained working plantation.

Folklorist John Lomax visited these remote prisons in the South throughout his travels to collect American folk music because “this is where you found the best singers.” The isolated prisons were a source of unaltered American folk music from years past. Lead Belly gained his release from Angola when John Lomax returned in 1934, writing a letter to Louisiana Governor Oscar K. Allen about Lead Belly’s singing. At this visit, Lomax recorded hundreds of Lead Belly’s songs for Library of Congress collections and archives.

Lead Belly returned to New York City with Lomax and started on a college tour and singing career. Lead Belly eventually because quite popular with the elite “left” including singers Woodie Guthrie and Pete Seeger. Lead Belly recorded several albums, which never were financially successful, and primarily made a living singing in clubs. He recorded for commercial record labels, especially Folkways Records, under the direction of Mose Asch which was taken over by the Smithsonian Institution when Asch died. The Smithsonian Folkway Collection maintains an extensive collection of Lomax’s old field recordings and many of Lead Belly’s albums can be purchased through this site. The are a  number of books written about Lead Belly.

Huddie Ledbetter was born in 1888 in Mooringsport, a very rural area of northern Louisiana close to Shreveport. The family moved to eastern Texas when he was about 5 years old. His father worked on a sharecropper farm. Picking cotton in the fields was a part of Lead Belly’s upbringing during his teenage years. Eventually the family purchased their own rural farm. At age 16 years, Lead Belly was married with a child, living next to his parent’s farm.

Growing up, Lead Belly learned songs from his mother including spirituals, lullabies and children’s play tunes. His father took him to Fannin Street in Shreveport, a red light district, where he learned more worldly music, ballads and blues. Picking cotton led to a knowledge of work songs. An accordion given to him by an uncle was his first musical instrument. Lead Belly rode his horse from the family’s remote farm to dances and parties serving as the musician during  his early teen age years.

Eventually, Lead Belly moved to Dallas to be a full-time musician incorporating the influences of jazz and piano playing. Although he sang, danced and played many instruments including mandolin, piano, harmonica and violin, his favorite was the 12-string Stella guitar. This guitar is slightly longer than standard guitars with stronger tension and lower pitched. Lead Belly often used finger picks when playing; the guitar sounded like a piano.

Lead Belly had multiple encounters with the law and was incarcerated many times. In 1915, he escaped from prison and a chain gang. Another infraction included a stent in a Texas prison in 1918 for murder of a relative over a fight about a woman. Lead Belly worked on the chain gang during the day and came back to entertain the prisoners and guards on his guitar at night. This lead to a pardon in 1925 by the Texas governor, who visited the prison almost every weekend to listen to Lead Belly’s singing.

When Lead Belly moved to New York City, he always dressed immaculately with a white shirt, pressed coat and shiny shoes. He could entertain both children and adults equally well, although sometimes his thick Louisiana accent was hard to understand. His musical career in the city was rocky with commercial music disappointments. Allen Lomax, John Lomax’s son, stepped in and helped with legal expenses after another altercation occurred with the law. Lead Belly became a regular on Lomax’s radio show and he eventually had his own radio show becoming a fixture in the city’s folk music scene.

Lead Belly sang not only traditional folks songs, but also wrote music. Some of his songs have political undertones, telling of  Depression-era conditions of blacks. One song about the Titanic tells the story of a black traveler who was unable to secure passage on the doomed ship.

Lead Belly died of Lou Gehrig’s disease or ALS (amyotrophic lateral sclerosis)  in 1949 in New York ‘s Bellevue Hospital Center and is buried in Caddo Parish, Louisiana. Although he died a poor man, shortly after his death the song “Goodnight Irene” was a hit selling over a million records for the folk group, the Weavers. In subsequent years, countless other artists and groups have recorded his songs including the Beach Boys, Clearwater Revival, Van Morrison, Nirvanna, Little Richard and Frank Sinatra.

From work songs to the blues, Lead Belly embodies the music of the Louisiana Delta. Lead Belly’s songs are often rhythmic in style with his Stella guitar accompaniment and deep voice belting out the lyrics. Green Corn is a dance song, played at a rapid beat for the dancer. It is almost chant-like.

The title, “Green Corn,” refers to corn liquor or corn whiskey and is called “green” because it comes straight from the still without aging. Demijohn is a glass gallon jug used for fermenting home brewed moonshine. The dancers would show their skill by dancing around and jumping over the bottle. A hoe cake is a type of cornmeal flat bread.

I compiled my version of “Green Corn” from several sources including a book collection of Lead Belly’s songs, internet sites and U-tube recordings. This is a composite song; it appears that Lead Belly must have played the song slightly differently at various occasions. The dulcimer, when played as an instrumental,  does not do justice or nearly replicate Lead Belly’s style of playing and singing. To approximate Lead Belly’s music, sing the song and use finger picks to finger-pick the chords as an accompaniment to the song.

Folk music collectors John Lomax and his son, Alan Lomax, preserved a rich part of Louisiana history when they found and recorded Lead Belly’s music. For this, we must be grateful. 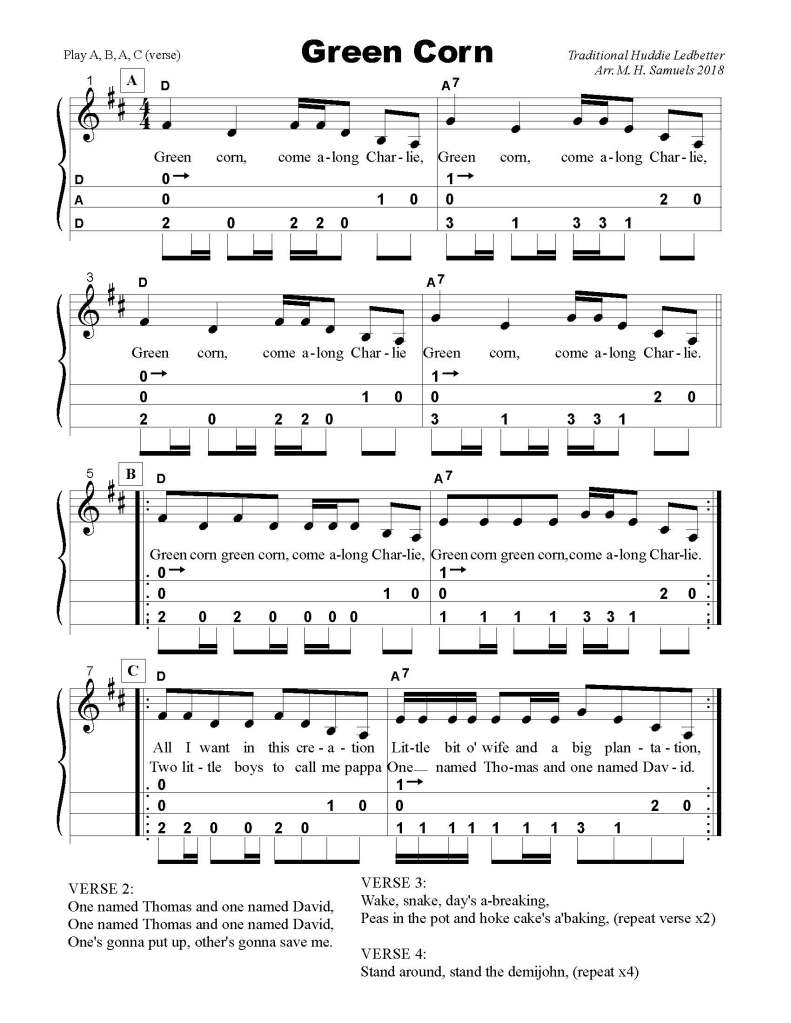 Here is a PDF version of the file which you can download:  green corn 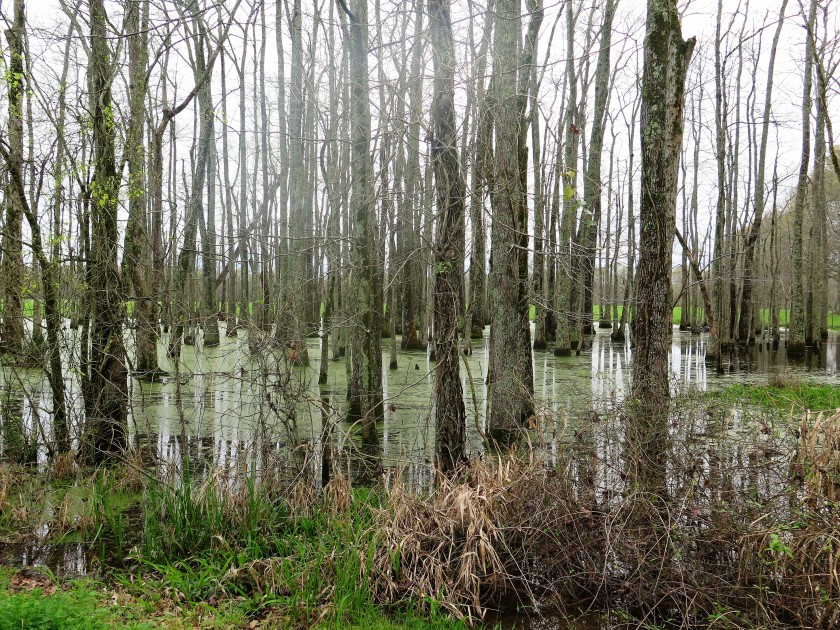