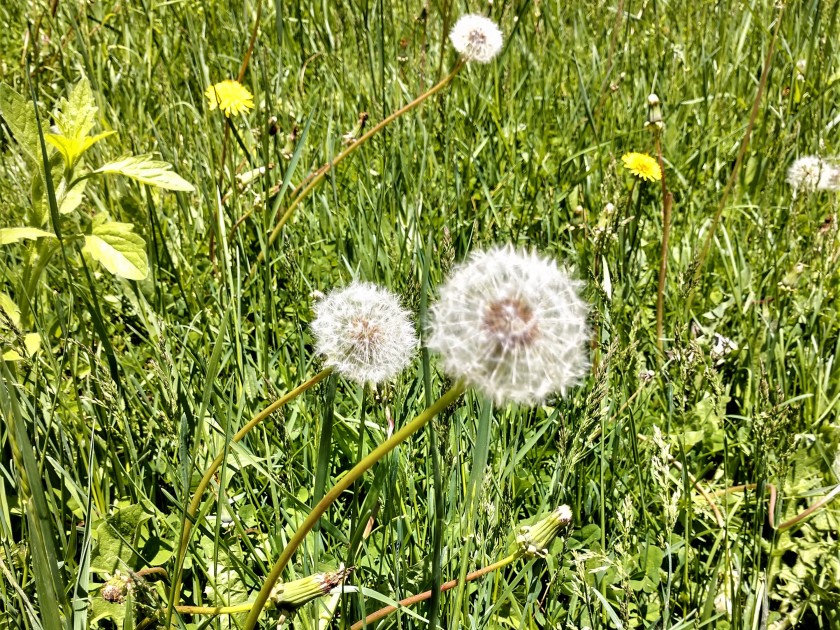 With our “stay at home directive” and extra time on my hands, I decided to pull out and explore a book which I purchased at our recent Lagniappe Dulcimer Fête. Steve Eulberg taught a workshop on the dulci-bro (a hybrid dulcimer and dobra) using a dulcimer with a resonator and slide and a 4-equidistant string configuration. He tuned the dulcimer to D-F#-A-D and raised the strings at the nut. So I changed one of my dulcimers to this string tune configuration for a “resonator dulcimer.” But I never reached the part of raising the strings to make that “bluesy” sound. The 4-equidistant strings and Steve’s tuning resulted in a beautiful, full and soothing tone to the dulcimer — almost like a harp. I experimented with chords and fingerpicking in the D-F#-A-D tuning and decided that “This Is My Father’s World” is a fitting song for this tuning.

About “This Is My Father’s World”

Maltbie Davenport Babcock was a Presbyterian minister who lived in Lockport, New York, which is close to Niagara Falls. He liked to take long walks along the steep cliffs (called the “Niagara Escarpment”) which run across upstate New York to enjoy the scenic vistas and views as well as walking along Lake Ontario. He would often declare to his wife that he was “going out to see the Father’s world.” After his death at aged 42-years-old in 1901, his wife published his writings including the poem entitled, “My Father’s World.” The poem was set to music in 1915 by a close friend, Franklin L. Sheppard. The music used was an old English folk song melody entitled “TERRA BEATA ” which means “blessed earth” in Latin.  I can vividly remember singing this hymn in church when was growing up; (I can remember the choir conductor –Mr. Huffman — with long white hair like Einstein belting out the song) and I could relate also to the words.

The hymn takes on more significance since my daughter attended college in upstate New York close to where Babcock lived. We visited Niagara Falls several times and also walked along the “Niagara Escarpment” which goes through Letchworth State Park where these photos were taken. The park is full of waterfalls and ravines as it cascades along.  It is truly easy to see how Babcock remarked that “this is my father’s world.”

The dulcimer is an extremely flexible musical instrument. There are so many creative and innovative ways to play it. One way to play the dulcimer is to arrange 4 strings by spacing them equidistantly across the fretboard. This results in a totally different style of playing and opens up many new possibilities. For example, tuning to D-A-A#-D adds all the accidental notes used in Scott Joplin’s ragtime tunes and is used by California dulcimer player, Juanita Baker. Steve Eulberg tuned his dulci-bro to D-F#-A-D. The advantage of this tuning is that it includes all the notes of a D Major chord when the open strings are strummed. Raising the strings off the fretboard and playing the dulcimer with a slide allows you to play chords and notes between the frets for a blues scale.  Playing barre chords or using a slide at each fret gives all the major chords.

There are other benefits of a 4-equidistant string arrangement, too. It is easy to develop fingerpicking patterns with the availability of a fourth string. Playing the dulci-bro with raised strings results in a “honky tonk” sound and gives bluesy tone to songs among other things. (Steve Eulberg has written a great book on the dulci-bro and I won’t repeat any of his information here — he’s the expert on this instrument.)

The very melodic and soothing tuning works well with slow, expressive songs. The tuning works for singing a song and playing an accompaniment of chords. However, it is not a tuning for fast fiddle tunes. So, the tuning isn’t the best one for jam tunes or fast songs. I thought that the hymn, “This Is My Father’s World,” is a song which should fit for the D-F#-A-D tuning and devised an arrangement. And lullabies are great songs for using this tuning. “Twinkle, Twinkle Little Star” is an example and I use it to demonstrate fingerpicking patterns in this tuning.

Perhaps you are like myself and have several dulcimers to choose from when selecting one to switch from 3 strings to a 4-equidistant string tuning. However, not all dulcimers can be adapted so look carefully for a dulcimer that works. When I first began playing the mountain dulcimer over 25 years ago, most dulcimers came with 4 strings. Typically, two strings were paired as melody strings. Unfortunately, many players saw the fourth string as an “inconvenience” and removed it from their dulcimers. It is not unusual now to see dulcimers built with slots for only three strings. Also, many dulcimers have nut and bridge slots for a double melody string (shown by the dulcimer on the left) and cannot be changed to a configuration for 4-equidistant strings (unless you use an adaptation to raise the strings). The dulcimer on the right is a McSpadden dulcimer and has a nut with slots which allows for 4-equidistant string arrangements.  This small feature is something to be aware of when purchasing a dulcimer — if you ever think you might be interested in exploring the nuances of a dulcimer.

For string gauges for the F# string, it depends on the vibrating length of your dulcimer fretboard. I used a .014 or .016 string (can’t remember) and tuned it higher than the bass string but lower than the A string.  This dulcimer has a 26.5″ vibrating length.

Of course, adding an additional string means getting used to an entirely new set of chord patterns. But then, we have lots of time! For playing only chords and singing along, barre chords can be used for the D, G, A and C chords (as well as Em, F#m and Bm chords). To play the melody and add harmony notes and/or chords, more complex fingerings need to be used. The F# string means that a D major chord can be played with D-F#-A notes and the D note an octave higher. But this string also gets in the way of other chords. I find that it works to flatpick the notes in these measures or play the discordant string/note anyway. If you are just playing this chord for several notes, it probably won’t matter (try not to be a perfectionist).  Here’s a chart that I made to identify the chord possibilities for typical songs. (A PDF file as at the end of the post.) I’m sure there are many more configurations for D, G and A chords. Getting used to four strings takes some effort, but I love to try new things and find that this a rewarding challenge. 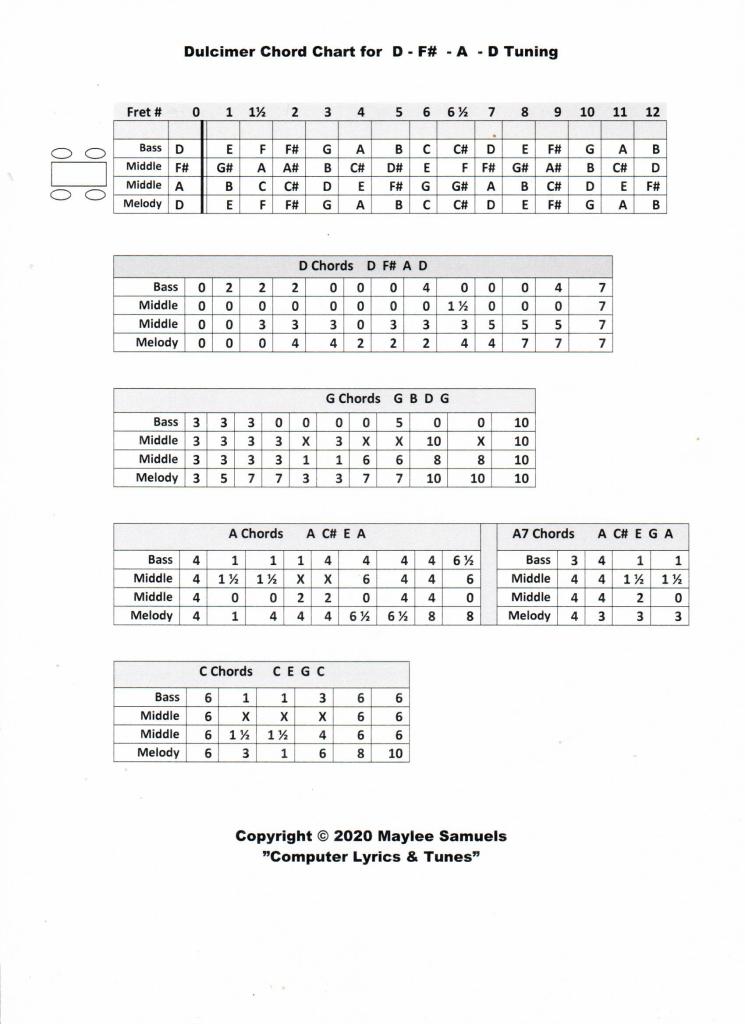 Fingerpicking with a dulcimer is a style of playing which can easily take up several posts (and books). There are many patterns and techniques which need be considered. Learning one fingerpicking pattern to use throughout the entire song is perhaps the easiest way to get started. Fortunately, “Twinkle, Twinkle Little Star” lends itself to this style of fingerpicking as the melody notes all fall on the downbeats of the song along the melody string.  So, I have included three versions of “Twinkle, Twinkle Little Star” (PDF files are at the end of the post):

“This Is My Father’s World”

Here is my dulcimer arrangement of the hymn, “This Is My Father’s World.” You can play the tune using any of the three styles of shown for “Twinkle, Twinkle Little Star” —  strum and flatpick, fingerpick (a little more complicated on this song) or use arpeggio chords and sing the melody. This is one if my favorite hymns — always make me appreciate the wonder of the world around us. Enjoy.

Do you want to learn to play the dulcimer? We hope to resume lessons in the fall of 2021. Message us for details.

The club meets each Monday from 6:00 pm to 8:30 pm at Community Bible Church on Jefferson Hwy. (close to Essen Lane). The club has resumed meeting after being on a Covid hiatus. Please respect social distancing and mask guidelines.