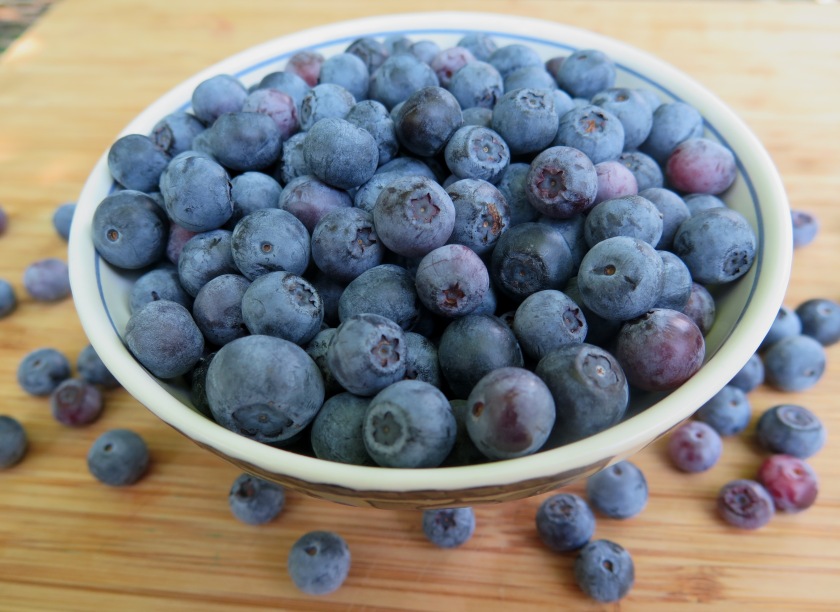 My dulcimer tab for this month is “Blueberry Hill.” Yes, there truly is a “Blueberry Hill.” My folks owned property in the beautiful Appalachian mountains of West Virginia. One of their many hobbies was growing blueberries on several of the hills. The blueberries were gigantic and flavorful. Enough for their family and plenty to share with friends and neighbors. What memories I have of spending time at their out-of-doors retreat. The song, “Blueberry Hill,” however, brings back totally different memories for other folks. The tune which we most often play is the rock-and-roll version of Fats Domino who lived in the city of New Orleans. Local dulcimer player, Jan, recalls that her mother grew up one block from where Fats Domino lived in the Nineth Ward of New Orleans. Jan has many fond memories of that neighborhood; of playing “Blueberry Hill” and other Fats Domino hits on her transistor radio during her teenage years. Remember a transistor radio? And Fats Domino’s raspy voice and piano? What contrasting memories!

Although neither of our memories have anything to do with the lyrics of this song; it is the music that triggers us and inspires us. And as much as it is rewarding to play fiddle tunes, etc, on the dulcimer; sometimes familiar tunes are good to play, too.

About the song, “Blueberry Hill”

“Blueberry Hill” lyrics were written by Larry Scott and Al Lewis with music by Vincent Rose, a big band leader of the Montmartre Orchestra in the 1920s. The song was published in 1940. The trio originally wrote the song for the 1940 Western, The Singing Hill, where it was performed by Gene Autry. However, the composers decided it was good enough to be released commercially as well. A reference quotes one of the lyrists, Larry Scott, as saying: “one important publisher turned down ‘Blueberry Hill,’ because, he claimed, blueberries don’t grow on hills. I assured him I had picked them on hills as a boy, but nothing doing. So Chappell And Company bought the song and another hit was born.” (https://www.songfacts.com/facts/fats-domino/blueberry-hill)

At least six jazz musicians and big bands made recordings of the tune that year. In 1940, it was a #2 US hit for Glenn Miller and his band. Louis Armstrong and Bing Crosby recorded a the song in 1950. That version apparently inspired Fats Domino of New Orleans to also record the song in 1956. It was Domino’s biggest hit, turning “Blueberry Hill” into a rock-and-roll standard. It climbed to the #2 spot on the Billboard Top 40 and became one of the biggest hits of 1956.

“Blueberry Hill” is a song of lover who is looking back in time. Two people met under the moonlight by a breezy willow tree on a hill in some sort of thrilling encounter. However, even though their vows “were never to be,” and the partner has left, the singer still has fond memories of “love’s sweet melody” and his “thrill” on Blueberry Hill. How sad, but probably so often true.

Playing the Tune on the Dulcimer

“Blueberry Hill” is another contemporary tune which does not easily transcribe to a diatonic dulcimer. Many of the chords in this tune are jazz-type chords and the notes just aren’t there on the dulcimer. And so I simplified things alot. There are several places with dissonance, but at least you hear a melody change. In spite of the complexity of the chords, all the notes of the melody — with one exception — can be played on a standard dulcimer in DAD tuning. I won’t tell where that note is — it is just to difficult to bend the “4” fret. You really don’t miss this note.

Pick and strum the melody. For strumming, play the notes on all three frets — otherwise flatbick the melody notes.

For interest, I added a “bass line” to my arrangement. This is totally my own conception — I’m changing a rock and roll tune to something for the dulcimer. You are welcome to play the bass line, omit it or make up your own version. Use either a standard or bass dulcimer for this part. Play only the notes shown — don’t add anything. For example, if there is nothing in the measure, then these are technically “rests.” Follow along with the melody line to see where to come in.

As you play and sing “Blueberry Hill”, I’m sure this song triggers memories for you, too. Perhaps a memory of a “true love” enounter under the moonlight as described in the lyrics. Or does Fats Domino’s singing bring memories of visits to the French Quarter in New Orleans — shown above. Or, as with the case of Jan and myself, perhaps this song means something totally different. In any event, enjoy the song. As this is a contemporary tune, it is intended for educational use only. A PDF version which can be downloaded follows these jpeg images.

“Learn to Play the Dulcimer”

The Lagniappe Dulcimer Society is offering two series of 4-week classes on learning to play the dulcimers. Register ahead and plan to attend all four classes. Some loaner dulcimers are available with advance registration. Adults only. Come and join us this spring at either of these locations and dates:.