March 20, 2016 Maylee at Beyond Gumbo Fete, Interesting Stories and People, Playing the Mountain Dulcimer, Tunes and Techniques One comment

Our annual Lagniappe Dulcimer Fête in March brings dulcimer players from all over the country to teach workshops and perform in concert. It’s a good way for local members and dulcimer players to become introduced to new music, ideas and techniques. As always, I am impressed with the talented musicians that come join in our festival. I’d like to share some of what I learned.  Meet Joe Collins. 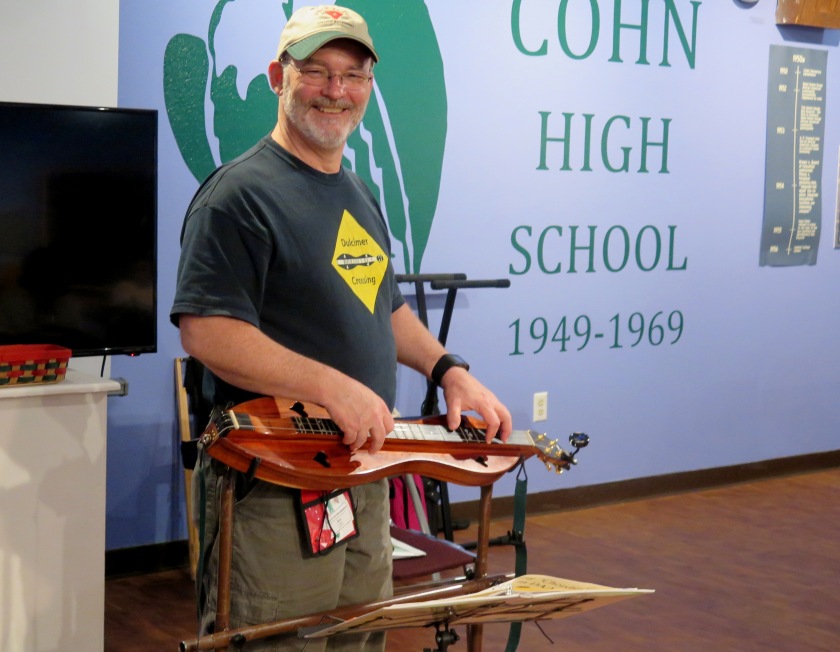 Joe Collins was a dulcimer workshop leader and performer this year. He is from Shelby, North Carolina. He began playing the dulcimer in the late 1970’s at coffeehouses, churches and schools. Since that time he has performed at festivals across the country, written several books and produced five C.D.’s. He is a songwriter and vocalist in addition to playing the dulcimer.

Here Joe, Barbara Brumfield and Regina Payne visit between activities at the fête. This was Joe’s third appearance at our fret–which attests to his popularity.

Joe Collins and I crossed paths years ago in the late 1990’s at Appalachian State Dulcimer Week in Boone, North Carolina. The week-long summer workshop was the place to go if you were a dulcimer player in the 1990’s. I was a novice player eager to learn anything; Joe was already an accomplished player. Twenty-five years later, Joe has truly mastered the mountain dulcimer–both as a skilled and talented performer and as a workshop teacher. He won the National Mountain Dulcimer Championship in 2007 at Winfield, Kansas–the pinnacle of competition for acoustic old-time stringed instruments.

At our Lagniappe Fête, Joe was asked to teach a workshop on playing chords in the DAA tuning. The DAA tuning is the traditional tuning for the mountain dulcimer, and although most contemporary dulcimer players tune to DAD, there are areas of dulcimer players around the country who play predominately or solely in DAA. This group of ladies from Pine Hill Dulcimer and Friends Club in Wiggins, Mississippi, is one of the groups that plays in DAA. The chord patterns were not difficult for these ladies and they were comfortable with what Joe was talking about.

Joe’s career involves adult education–he has a Ph.D in that field–and Joe brings well-written materials to his workshops. This was no exception. The chord charts in DAA were extensive and easy-to-follow. The tab was easy to read and we could actually play the songs. 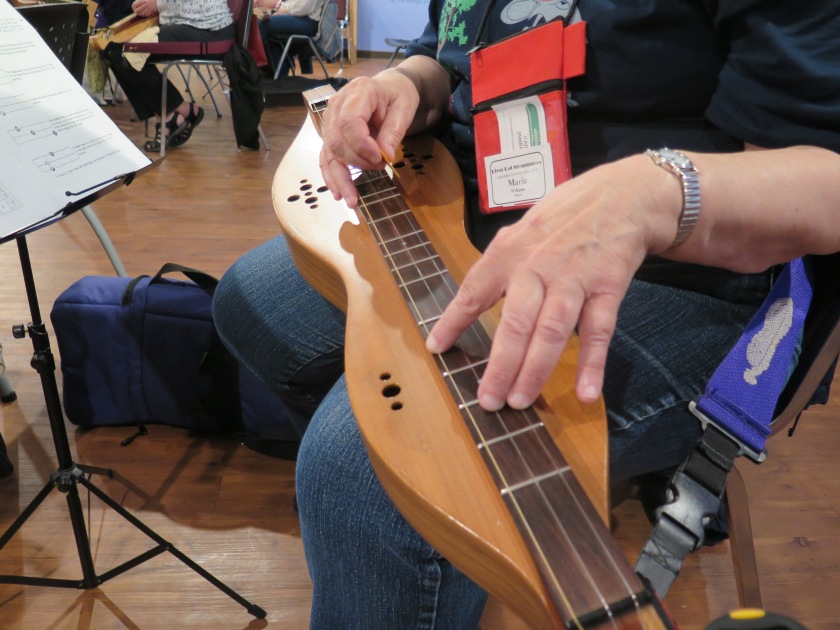 We’ve got it! Right?

This will take some practice. Learning different chord shapes in a new tuning is like learning a new language. Nevertheless, there are advantages to using the DAA tuning. It is an easy tuning to grasp,  the frets extend below the keynote (which is on the 3rd fret) so the entire melody can often be played on the first string. It is easy to make harmonies in DAA; the melodies and harmonies are beautiful.

Joe taught other workshops in DAD tuning at the fete, too. These included ones on fingerpicking, using the dulcimer to accompany singing, funny songs, fast celtic tunes and getting started on the dulcimer. A wide range! 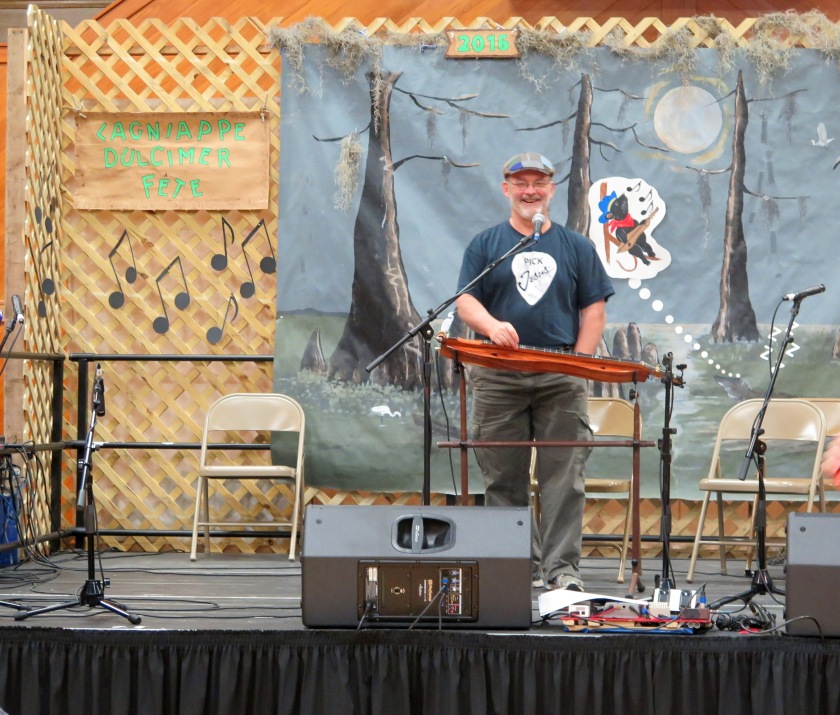 Joe performed at Saturday night’s concert and gave us a taste of his music at Thursday night’s concert. Joe is an accomplished songwriter. At Thursday’s concert he performed one of his own compositions, “Midnight Jig.” It is a beautiful song–I could listen to it over and over and never tire of it. Here’s a You-Tube video of the song (used with permission of Dan Landrum, the publisher of Dulcimer Player’s News.)

One of the most memorable songs that Joe often includes in his concerts is his rendition of the “William Tell Overture” also known as the “Lone Ranger” theme song. Didn’t think it could be played on the dulcimer? Think again. Here’s a You-Tube video of Joe playing the song–not at our fete but several years ago..

What’s Joe Up To Next?

Visit Joe Collin’s WEB site (//jcdulcimer.com/) to learn about future festivals and events which he is participating in. Joe also sells his books and C.D.’s on his WEB site. I would not hesitate to recommend any of his books–the tab is large, easy-to-follow and his arrangements are “playable” for novice to intermediate players.

It was great having Joe at our festival this year! Come again.