April 25, 2016 Maylee at Beyond Gumbo Fete Leave a comment

Our Lagniappe Dulcimer Fete in March of 2016 featured a Mardi Gras extravaganza complete with a pageant and a Mardi Gras Krewe with king and queen. The plans for our celebration grew as the month’s went by. It turned out to be quite a production! Here’s what happened.

It all started when the planning committee invited Jim Miller of Hampton, Tennessee, to be a performer and instructor at our fete. Jim had attended some of the Bayou Dulcimer Club’s festivals and was their last Mardi Gras king 16 years ago. Jim offered to return his crown and scepter and so we invited Jim to be the out-going king. He played along with the event.

We couldn’t locate the last Bayou Festival Queen so Denise Guillory of the Bayou Dulcimer Club graciously accepted our invitation to be queen. She became excited as the months went along and offered to locate some “real” Mardi Gras costumes. She spent alot of time on the costumes; having her dress altered. Denise located this beautiful collar, very much reminiscent of Mardi Gras costumes.

Our event started out with the return of our three blind mice and cat from several fete’s ago. They pranced around and entertained the crown as club members sang, “Boom, Boom Ain’t It Great to be Crazy”, with new lyrics by Peggy Broussard.

Since we were planning a Mardi Gras pageant, we needed a theme and story. “River Rat Strummers” was our fete theme; it made the perfect story. A river rat isn’t actually a rat; he is a person who makes his living from the swamps, bayous and rivers in Louisiana. Our river rat mascot was Monsieur Pierre Gaspard and his motley crew.

I wrote some new lyrics to “St. James Infirmary” and changed the melody. My song involved Pierre Gaspard returning to our Mardi Gras ball, along with his queen, to turn in his crown and scepter. The fete krewe had secretly elected a new king and queen to be announced at the ball. The out-going king and queen walked in from the back of the audience as dulcimer members played the song and Jak Stallings sang the lyrics.

Denise managed to borrow some authentic costumes with 16 foot trains from a 1960’s Mardi Gras ball. They were beautiful.

Here are Denise and Jim seated. 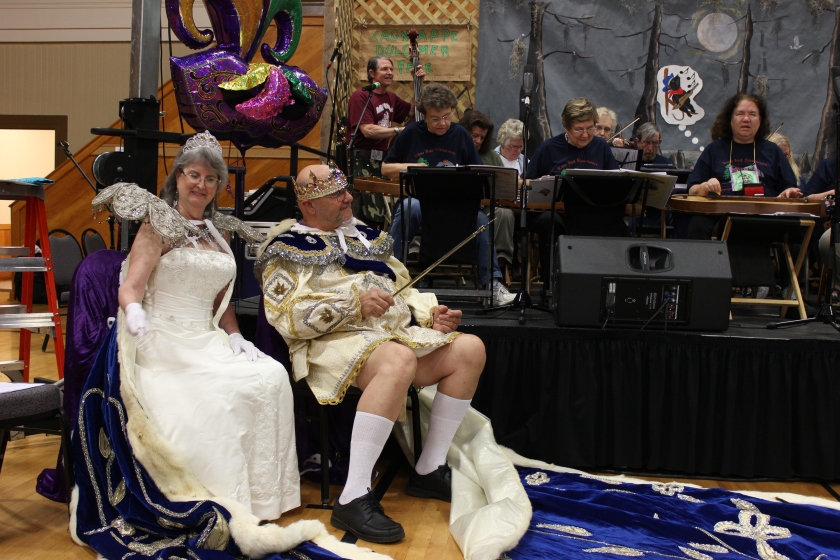 1. I went down to St James Bayou where the ball was goin’ to be
I was waiting for my true love ’bout a quarter after three.
He was mighty handsome, And I was very hot,
Along came rat king Gaspard and his krewe a motley lot.

FIRST CHORUS:
And they came from in the bayou, with the stars so bright
Gonna’ have a Fais Do Do, gonna’ dance all night.

2. Well King Gaspard was a river rat,
Made a living on the swamp,
Hunt and fish, it was a hard life, Oh that’s where he did stomp.
River rats they like to party and they’re here tonight
To crown the king and queen of the ball tonight

3. It was down on St. James Bayou,
With my girl we had front seats
We’re here to have a good time, Pass the secptor, what a feat.
Ah, here comes rat King Gaspard and his lovely rat queen,
And the Captains of the krewe, they are waiting in the wing,

THIRD CHORUS:
Give a cheer, give a cheer as they walk through the crowd
Give a toast to old King Gaspard, river rat so proud.

FOURTH CHORUS:
Give a cheer, give a to our new king and queen,
Now let’s start the party, let’s dance and sing.

Here is the new the royal couple.

If Ever I Cease To Love

The song, “If Ever I Cease to Love”, is the official anthem of the Krewe of Rex in New Orleans and has been sung at Mardi Gras balls since the late 1800’s. Mary Malone and Judy Messer serenaded the new queen and king.

A Second Line parade is a group of revelers and musicians who follow behind a parade procession–often a wedding or funeral. We ended our celebration with the parade, lead by Joe Besse.

And of course, we threw plenty of beads!

It was a fun time for all of us! Quite and event.

Ben Samuels, independent film maker from New Orleans, came and took some photographs and made a montage of the night’s events.

And “If Ever I Cease to Love,” adapted from Paul Andry’s rendition.

And one more photo of Denise and her beautiful gown. What will we do at next year’s fete? Come and see.

Concert: EBR Bluebonnet Library -- April 23, 2022 at 2:00 pm. Lagniappe members will share a variety of music which can be played on the dulcimer as an introduction to our May Beginning Dulcimer Classes.

Do you want to learn to play the dulcimer?

Registration is required as class size is limited to 15 participants.  Message me to register — as the library is not doing the registration for these classes. Loaner Dulcimers are available with registration.

The club also meets at the EBR Fairwood Library on Thursdays from 10:30 am to 12:00 noon