June 29, 2016 Maylee at Beyond Gumbo Interesting Stories and People, Playing the Mountain Dulcimer, Tunes and Techniques Leave a comment

Last summer our librarian dulcimer member, Bonnie, lead a very successful community out-reach program, “Teaching Children to Play the Dulcimer.” This summer she had the creative idea of reading a book to the children and adding dulcimer music to go along with the story. She selected the book, “Giraffe’s Can’t Dance,” by British author, Giles Andrease, with illustrations by Guy Parker-Rees.

According to a review on the WEB site “Good Reads,” here’s the premise of the book:
(http://www.goodreads.com/book/show/765148.Giraffes_Can_t_Dance)

“Gerald the giraffe longs to dance, but his legs are too skinny and his neck is too long. At the Jungle Dance, the warthogs waltz, the chimps cha-cha, and the lions tango. “Giraffes can’t dance,” they all jeer when it’s Gerald’s turn to prance. But with some sound advice from a wise cricket, Gerald starts swaying to his own sweet tune.”

Bonnie made hats to represent the different animals in the story. 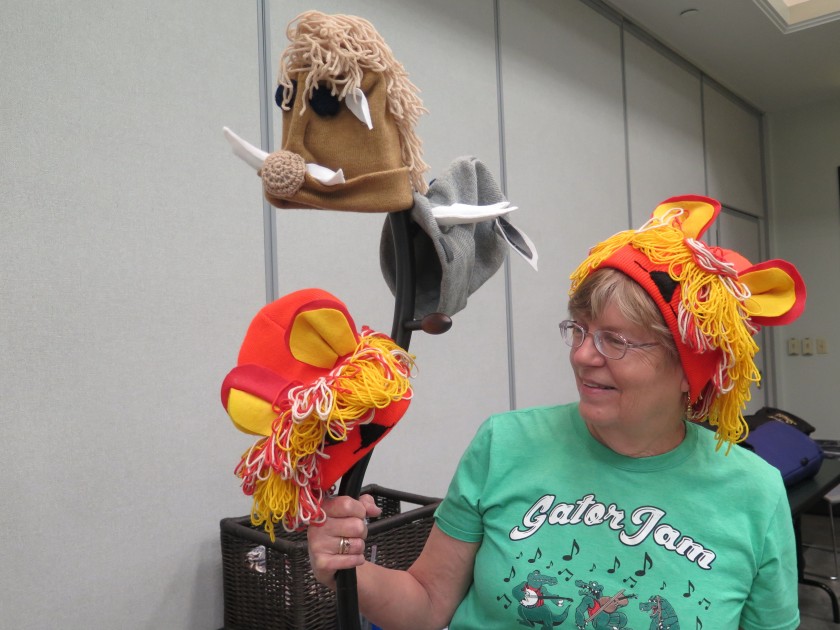 Our Gerald giraffe puppet danced different steps to various moods in the story as Bonnie read the book and we played songs on the dulcimer which matched the moods. 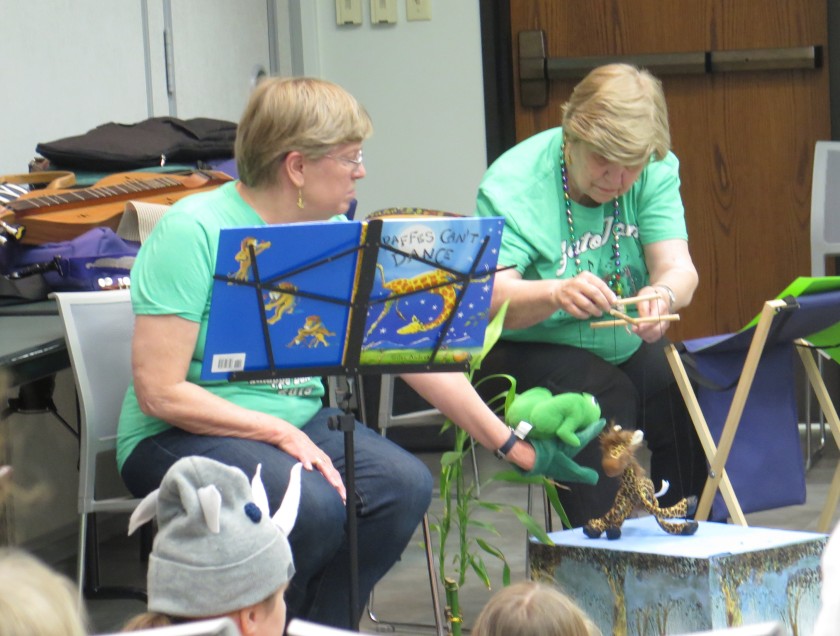 At one point in the story, the jungle animals danced different types of dance steps. Bonnie selected a child from the audience who put on a matching hat to Bonnie’s hat and the two danced the appropriate dance steps as dulcimers played along. We played the Blue “Danube Waltz” to illustrate a waltz step as the warthogs danced.

And to the tango, dulcimer players strummed “La Palamo”, a Spanish love song and tango with the lions. 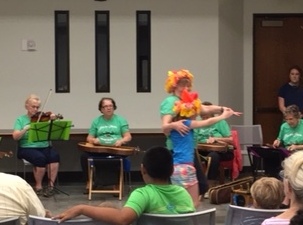 The baboons danced a Scottish reel as we played “Morepath Rant.” 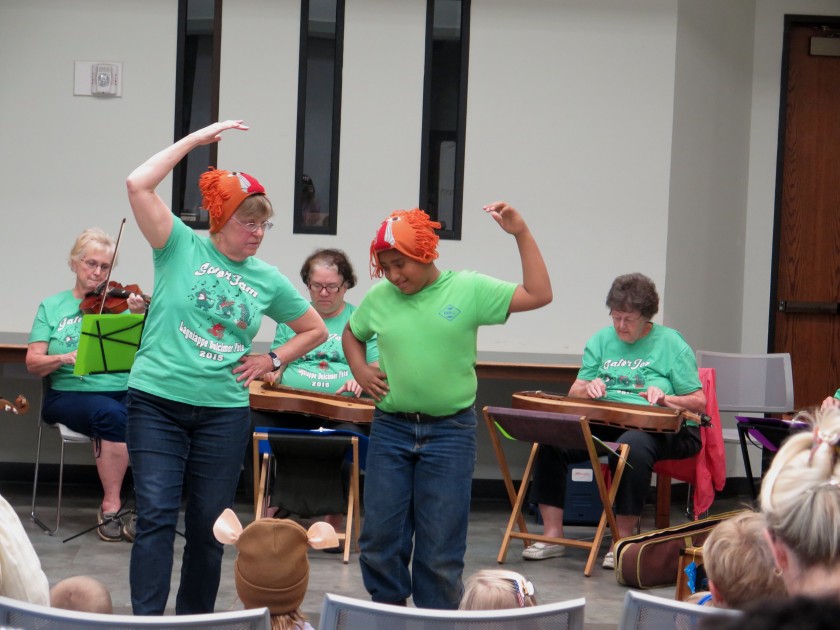 We also played “The Hokey-Pokey” to a rock and roll beat along with rhinos dancing and a cha-cha to “BINGO” with chimps dancing.

And a cricket played his fiddle, too. We played “Zip-A-Dee-Doo-Dah” along with Mary on her fiddle. Here we are waiting to play. 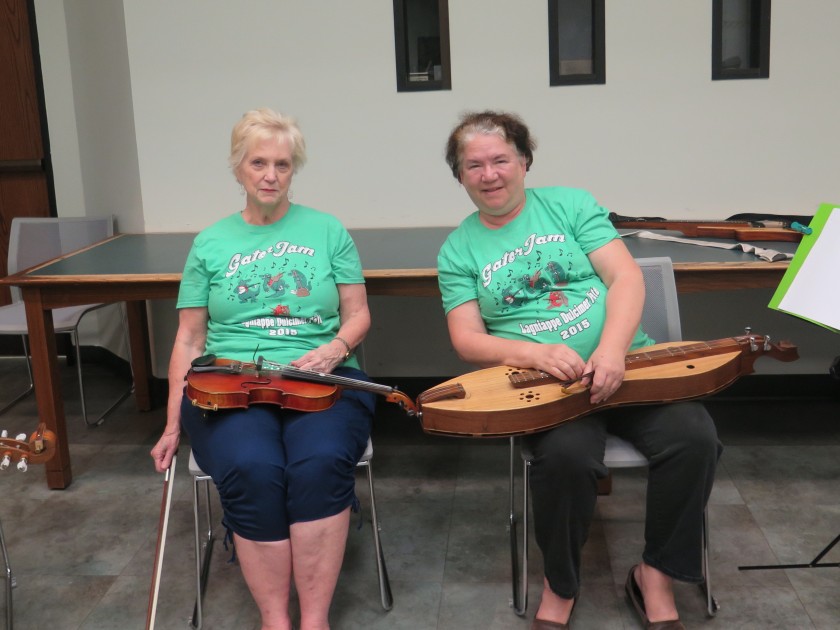 These music selections had quite different rhythms and “feelings’ which gave a good representation of what a person can play on the dulcimer. 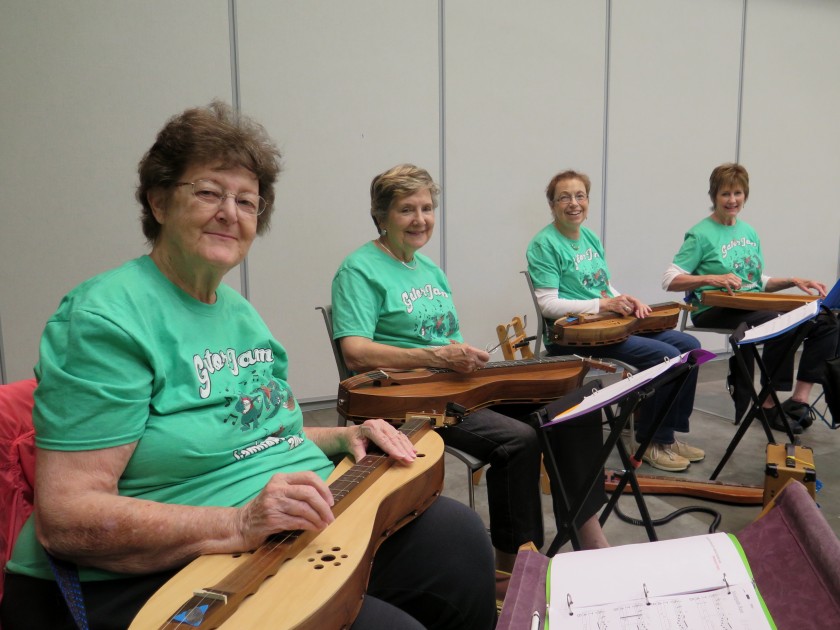 At the end of the book, everyone in the audience who wanted to dance, got up with Bonnie and danced.

After the story, Bonnie had cardboard teaching dulcimers ready and “Gator Girl” dulcimer players taught the audience children how to play several tunes.

It was a wonderful introduction to playing the dulcimer. And we, the dulcimer players, enjoyed ourselves and were challenged by learning some new songs. 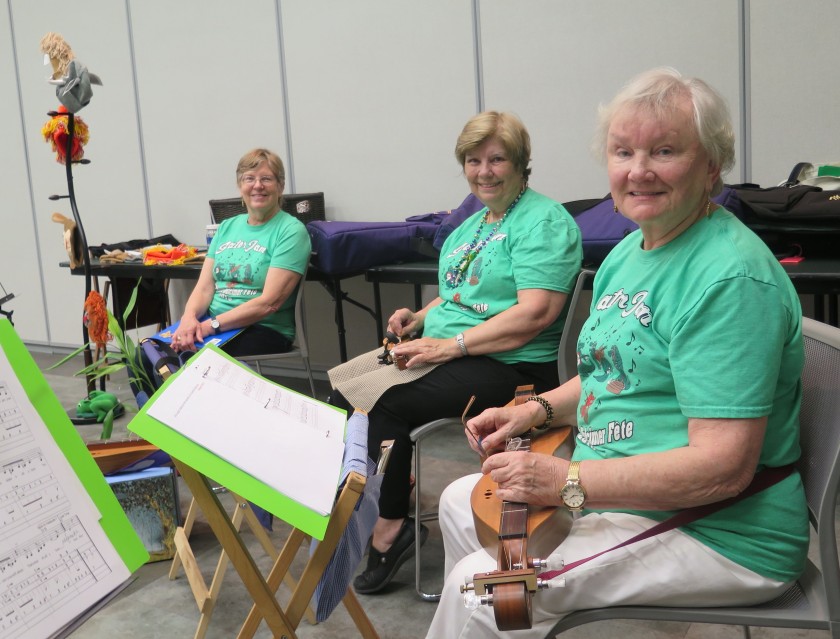