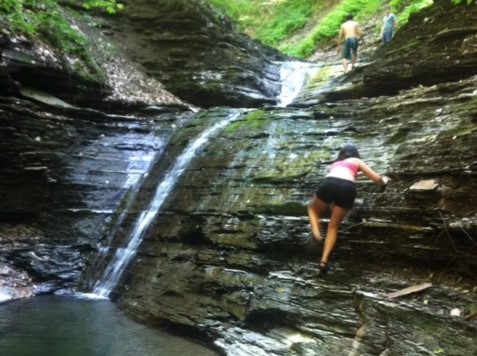 July 31, 2018 Maylee at Beyond Gumbo Tunes and Techniques Leave a comment

Here’s a lively old-time Virginia fiddle tune, “Over the Waterfall,” that I’ve arranged for the mountain dulcimer. Although this tune is often played on hammered dulcimer; I rarely hear it played by mountain dulcimer musicians. Perhaps the reason is that the tune requires the person to play on the upper octave of the mountain dulcimer; a little more treacherous for many mountain dulcimer players. But why not venture into something new, it’s  great tune. And I love waterfalls; here’s a waterfall in the hills of upstate New York close to Buffalo.

“Over the Waterfall” is a traditional Virginia-style fiddle tune. It is credited to Henry Reed of Glen Lyn, Giles County in Virginia. The area is the mountains of southwest Virginia and it is in the same vicinity as Galax, Virginia, with the rich tradition of fiddlers and Galax style-dulcimer players. It’s a remote part of the state. Perhaps the isolation contributed to the preservation of old-time music–before “contemporary” songs reached the area.

I studied at Virginia Tech, in Blacksburg, Virginia, for one year of graduate school and remember driving to Giles County to collect nutritional data on infants and young children. It was a beautiful but remote area.  There’s a beautiful waterfall close to Bluefield, Virginia, that we’d visit and hike to on weekends. It is not dissimilar–but much higher and longer– to this one which again is in upstate, New York.

Henry Reed lived from 1884 to 1968. He said he first heard of the song when he was a young boy around seven years-of-age which would put this in the late 1800’s. He heard the song at a traveling circus-type show and perhaps the tune was being played by a steam-driven calliope. Folklorist and fiddler, Alan Jabbour, collected and transposed the song from Henry Reed’s playing. Jabbour popularized the tune with his old-time 1960’s string band named Hollow Rock. Jabbour states that the melody is similar to several tunes from the British Isles including “Eggs and Marrowbones” and “Old Woman from Wexford” as well as others. In several British Isles versions, the song includes lyrics where the husband throws the wife over the waterfalls for various reasons.

The song was first recorded (on a record) in the late 1920’s by Al Hopkins and the Bucklebusters as “The Fellow that Looks like Me.” These fiddlers were also originally from Galax, Virginia.  At one point, the song was played so widely that store owners tired of the song and asked fiddlers to go outside to play the song!

This and many other songs are preserved by the Library of Congress in their American Folklife Center. It is a fascinating collection to visit on the WEB and includes history, audio recordings and transcriptions of some of the songs. If this link is accurate, it will take you to a recording of Henry Reed’s fiddle playing of the song done in 1967.

Mountain Dulcimer Versions of “Over the Waterfall” in DAD tuning

Perhaps mountain dulcimer players shy away from playing this tune because the notes on the dulcimer,  in the “A” part, reach to the higher fret numbers, beginning at the “7” fret and going up to the “12” fret. It is much more challenging to play these higher numbers. The melody for the “B” part of the tune is played on lower frets (a bit unusual for the “B” part to be played entirely lower than “A” part). The song ends at the “0” fret giving a very large range of notes to the song.

The song can be transposed an octave lower. However, you need a 1-1/2 fret on the middle string to play the C natural note. Also, transposing the tune an octave lower means that the some of notes of the “B” part must be played on the middle and bass frets, or across the dulcimer strings.  But take this as a challenge, not a roadblock.

The tune is played by fiddlers in the Key of D. It includes as C flat note in the “A” part, giving it a Mixolydian tuning and whining mountain feeling. On the mountain dulcimer, the song can be played in the DAD tuning with the “6” fret rather than the “6-1/2 fret” for the Mixolydian mode. To play an octave lower you must have a 1-1/2 fret on the middle string.

To play the tune, strum the strings across all the frets letting the middle and bass notes drone. On the lower version, flat pick some of the melody notes in the on the middle and bass stings. A second person can add chords to add some variety. (The chords and suggested fret numbers for each chord are shown above the standard notes.)

Here’s the tune, it’s my version which is slightly simplified from Henry Reed. Give the tune a chance; it’s challenging to play something new.  First are JPEG files and then after these are PDF files which you can download. Please copy, share and play with others.

Here is the high version.

And the low version:

Here are the PDF files:

Over the Waterfall – High Version

Over the Waterfall – High Version

Over the Waterfall – Low Version

Over the Waterfall – Low Version

And finally we come to the most famous of all waterfalls–Niagara Falls–which we visited several years ago. Let’s hope the old man didn’t throw is wife over these falls!

As I mentioned at the beginning, I love waterfalls!  Enjoy the tune.