I recently visited Austin, Texas, for a family reunion and that made me think of some of my favorite cowboy songs. Austin is center stage for live country music and this includes many old cowboy tunes.  Some of these cowboy songs are variations of old ones which came from the British Isles and Ireland. The songs are quite beautiful and well adapted for playing on the dulcimer. I tabbed out “Streets of Laredo” for the dulcimer which is one of the most popular and well known cowboy songs. It is a sad lament.

In addition to the music of Austin, we were entertained by the sight of hundreds of Mexican Free-Tailed Bats. The bats flew out from under the The Congress Street Bridge along Lady Bird Lake (part of the Colorado River) in downtown in Austin at sunset.

If you visit Austin, Texas, in the summertime and early fall, don’t miss going downtown to view the bats at sunset. It is quite a tourist attraction. Renovations to the Congress Street Bridge in 1980 made it an ideal place for bats to nest. The bats begin to emerge from their habitat at sunset. First a few come out and then huge flocks of bats follow. They fly high in the skies and circle the downtown skyscrapers. At the peak season, there are about 1.5 million bats. This makes an impressive show.

Folks viewed the bats from both the bridge and the water.

The only “bat” song that I can think of is “Leatherwing Bat.” I provided tab for this song in October 2017. It is one of my favorite “Halloween” tunes and is time to get it out again to play. The trip to Austin also made me to think of some of my favorite cowboy songs. Several contemporary cowboy songs from Texas, such as, “Waltz Across Texas”, are copyrighted and so I won’t post these on the internet without permission. However, there are plenty of cowboy songs in the public domain such as: “The Streets of Laredo”, “Git Along, Little Dogies,” “I Ride an Old Paint,” Clementine,” “Sweet Betsy from Pike,” “Frankie and Johnny” and “Red River Valley”.

The “Streets of Laredo” or “The Cowboy’s Lament” is a beautiful but sad song. The song is derived from a seventeenth century British ballad, “The Unfortunate Rake.” An earlier Irish variation is “The Bard of Armagh.” The lyrics vary, but they all revolve around a young dying cowboy who gets the attention and tells his story to another cowboy who was walking down the street. In versions of the the Irish song, the song was set in the Covent Gardens, an area of town known for ladies of the night. Presumably the young dying cowboy laments that he didn’t know of his condition in time to take dose of mercury–a remedy for venereal disease. In some versions the cowboy is “covered in white linen” which was a practice for caring for a person with syphilis.

In the American version, the song takes place in Laredo, a town in southern Texas along the Mexican border. In the song, the cowboy suffers a fatal gunshot wound. The song ends with a tribute to the young cowboy:

A Texan cowboy, Frank H. Maynard (1853 – 1926), claims to have written the lyrics to the American song with publication in 1924. (The song was also published by folk song collector, John Lomax, in 1910 in Cowboy Songs and Other Frontier Ballads.) The song has been recorded by many artists including Johnny Cash, Joan Baez, Burl Ives, Roy Rogers, Chet Atkins, Arlo Guthrie, Willie Nelson and Waylon Jennings.

Dulcimer tab for The Streets of Laredo

The “Streets of Laredo” is easily played on the dulcimer in the DAD tuning. Strum across all the strings.The song is set in 3/4 time or “waltz time.” The dotted quarter notes give the song a syncopated rhythm. “Air-strum” on the outward beat to maintain the strumming direction and rhythm. Suggested chord fret numbers are written above the standard notation. They are written as “reverse chord fingerings” and, although the chords may be a little tricky to play, they make for a nice harmony and predominant descending bass line run when played from bass-to-melody string. To play the “5-3-3” chord on the bass-to-melody strings, I suggest to barre across the third frets and then reach to the fifth fret on the bass string with the index finger. Playing reverse chords takes some practice but adds another dimension to the dulcimer.

So, enjoy this old cowboy song and all the sad lyrics. The Texas Hill Country area including Austin makes a great setting for this song and a fun city to visit.

Here’s the PDF tab for the song: The Streets of Laredo 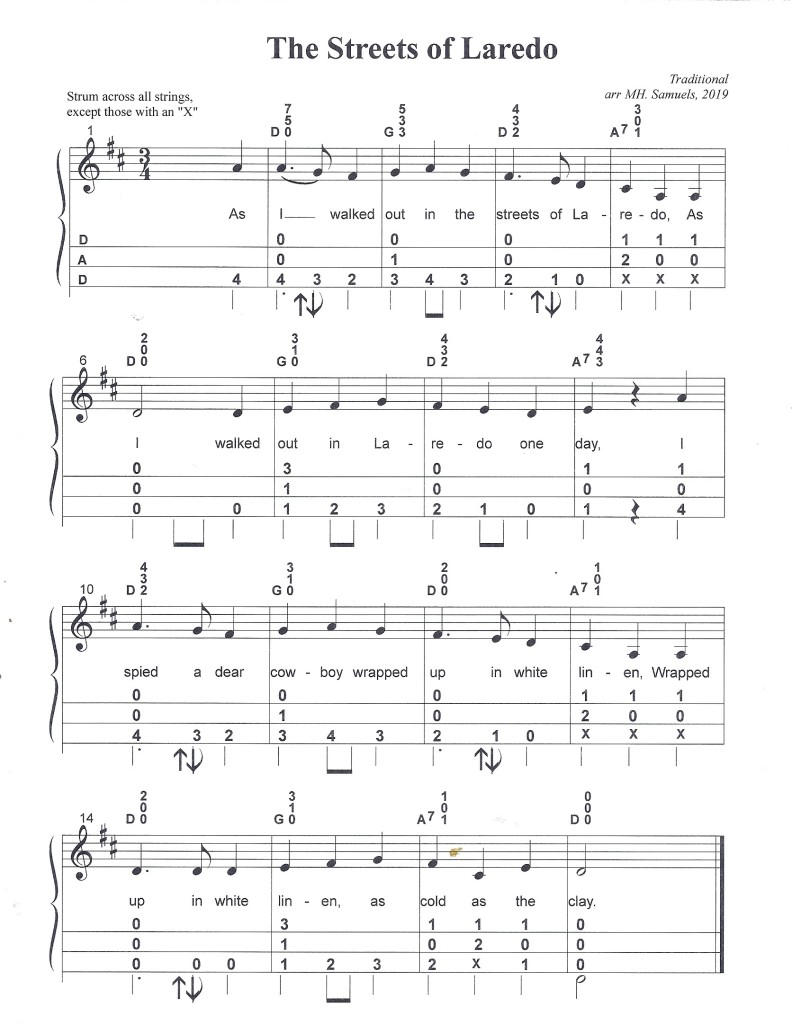 “I see by your outfit, that you are a cowboy.”
These words he did say as I slowly passed by.
“Come sit down beside me and hear my sad story,
For I’m shot in the chest, and today I must die.”

“Oh, beat the drum slowly and play the fife lowly,
And play the dead march as you carry me along;
Take me to the green valley, there lay the sod o’er me,
For I’m a young cowboy and I know I’ve done wrong.

“Get six jolly cowboys to carry my coffin,
Get six pretty maidens to bear up my pall.
Put bunches of roses all over my coffin,
Roses to deaden the clods as they fall.”

“Then swing your rope slowly and rattle your spurs lowly,
And give a wild whoop as you carry me along;
And in the grave throw me and roll the sod o’er me.
For I’m a young cowboy and I know I’ve done wrong.”

“Go bring me a cup, a cup of cold water.
To cool my parched lips”, the cowboy then said.
Before I returned, his spirit had departed,
And gone to the round up – the cowboy was dead.