February 13, 2015 Maylee at Beyond Gumbo Interesting Stories and People Leave a comment

With creativity and talent; the sky is the limit on playing a musical instrument. Quintin Stephens shows this with the traditional Appalachian dulcimer; taking it to another level. Here is his solid body electric “Blue Shark” dulcimer.

This dulcimer dad really rocks — this is an electric dulcimer. Quintin plays the dulcimer in a very non-traditional manner using slap techniques, double stops and many other cool licks in his arrangements. He also holds the dulcimer upright-like a guitar rather than on his lap. Here he is with a traditional six-string dulcimer. 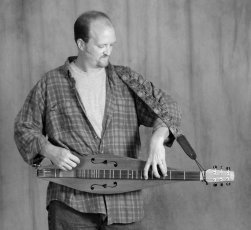 Quintin doesn’t limit himself to dulcimers–he’s a versatile musician. One of his goals is to help kids enjoy and appreciate music; hence my term “dulcimer dad”. Here are some of the electric guitars that he brought to career day to get the school class kids interested in playing a musical instrument. Got to love the lady bug electric guitar. What young girl wouldn’t want to become a rock musician after playing this one!

Quintin’s dulcimer playing style has evolved over the years. He began his music career at age eight years by going with his father–who played the dulcimer–all over the country to dulcimer music festivals. At this time, dulcimers were played in the very traditional mountain style–thus Quintin learned to play Appalachian fiddle tunes using a noter on the melody string.

At some point, Quintin and his father were exposed to the dulcimer playing of a group of musicians on the West Coast. These musicians had never heard a traditional dulcimer and developed their own style of playing which included strong rhythmic strumming, very melodic patterns–more like a rock guitar. I do believe that a light bulb clicked and Quintin and his father re-invented the music they were playing. The rest is history.

Quintin builds dulcimers, becoming a skilled luthier. The style of these dulcimers has evolved over the years too, into something quite unique and special. These are primarily solid body, electric dulcimers. I had fun looking at all the dulcimer’s he’d made. Here’s my favorite.

And if you play both guitar and dulcimer, this one is for you.

Or if you are like more traditional woods you might like this one. Most of these dulcimers are special orders for customers; but here’s hoping he has few left to try out out at the Lagniappe Dulcimer Fete.

In addition to performing music and giving workshops, Quintin writes music and has produced several original albums. These can be found on his WEB site. He has been an instructor and performer at many dulcimer workshops and festivals over the past 25 years.

Here’s a more traditional style of dulcimer in a Galax, Virginia,  fiddle style; sort of a teardrop dulcimer but not quite. I’m assuming Quintin built it, too. But I’m not sure I could play it–don’t have giant finger reaches and stretches. It is much larger and longer than a traditional dulcimer. 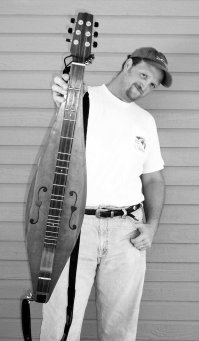 I got to know Quintin at some of the dulcimer fetes in the area including past Lagniappe Dulcimer Fetes. Several years ago Robert Force–one of the West Coast dulcimer players–came to the Bayou Dulcimer Festival in Covington, Louisiana, playing his song, Wellyn, which was one of these inventive new songs that impressed Quintin and his dad (and me, too). Quintin  played this as a duet at one of our fetes with Robert Force and I was totally in awe of what your can play on the dulcimer.

Quintin will be a featured instructor and performer at this year’s Lagnaippe Dulcimer Fete in March 2015. Here’s hoping that I can pick up a few new techniques at his workshops and perhaps learn that awesome west coast dulcimer tune, Wellyn, that I like so much.

See you in March!

And a link to a gallery of a group of his dulcimers:

Here’s a link to the dulcimer fete’s WEB page with includes a registration form, list of performers and schedule of workshop classes.