November 22, 2019 Maylee at Beyond Gumbo Fete, Playing the Mountain Dulcimer, Tunes and Techniques Leave a comment

Old-time fiddle tunes are great ones to play on the mountain dulcimer. In fact, the first song that most of us learned to play on the dulcimer was the folk song and fiddle tune, “Bile Them Cabbage Down.” The Lagniappe Dulcimer Society club has built up quite a collection of fiddle tunes over past 20 years. The theme of our next fête is “Jambalaya Jammin’.” And so, we are in the process of compiling these and other tunes into a book for our festival in March 2020. It is an ambitious project — but a rewarding one — and will be a compilation of many of the songs that our club has played since our beginnings. One of the old-time fiddle tunes which we plan to include is a song which we learned from Paul Andry, “Flop Eared Mule.”

“Flop Eared Mule” has been described as a Old-Time, Bluegrass, Canadian, American, Schottische, Polka, Quadrille (a type of square dance), Breakdown. It is widely know across the United States, goes by many other names and has been played by fiddlers from the Ozarks to North Carolina to the Galax, Virgnina, area. One source says “that it seems reasonable to assume that Flop-eared Mule was derived from the “Detroit Schottiche” a three-part melody written and published in 1854 by Adam Couse, a dancing master who owned a music store in Detroit.” It is included in the Library of Congress’s audio recordings of folk music as well as many other folk music collections.

In any event, the song is well-known by fiddlers across the country and now by dulcimer players, too!

Playing the Tune on the Dulcimer – Barre Chords

“Flop Eared Mule” is fun but challenging to play on the dulcimer because it changes keys on “Part B.” In DAD tuning, the song begins in the Key of D. Then it goes to the Key of A in the second half of the tune. Well, you can’t really add a capo in the middle of the song. So the easiest way to change keys is to use “barre chords.”

With a “barre chord’ you hold down all the strings at a particular fret. For example, in DAD tuning, holding down all the “4” frets on the dulcimer – melody, middle, and bass frets — changes to the Key of A. Now you are in the right key to play the “Part B.” Keep all these strings down using you fifth, fourth and middle fingers. Reach up to play the melody frets with your thumb. Add your index finger on the bass string to play a chord. Hey, now all five fingers are holding down frets on the fretboard. Challenging, but we can do it!

So, let’s play “Flop Eared Mule” on the dulcimer. It is a great tune and one of the many tunes which we acquired from Paul Andry, Bayou Dulcimer Club founder, at our club’s beginning.

Here is the tune and also a harmony part which I created to add some interest to playing this song. 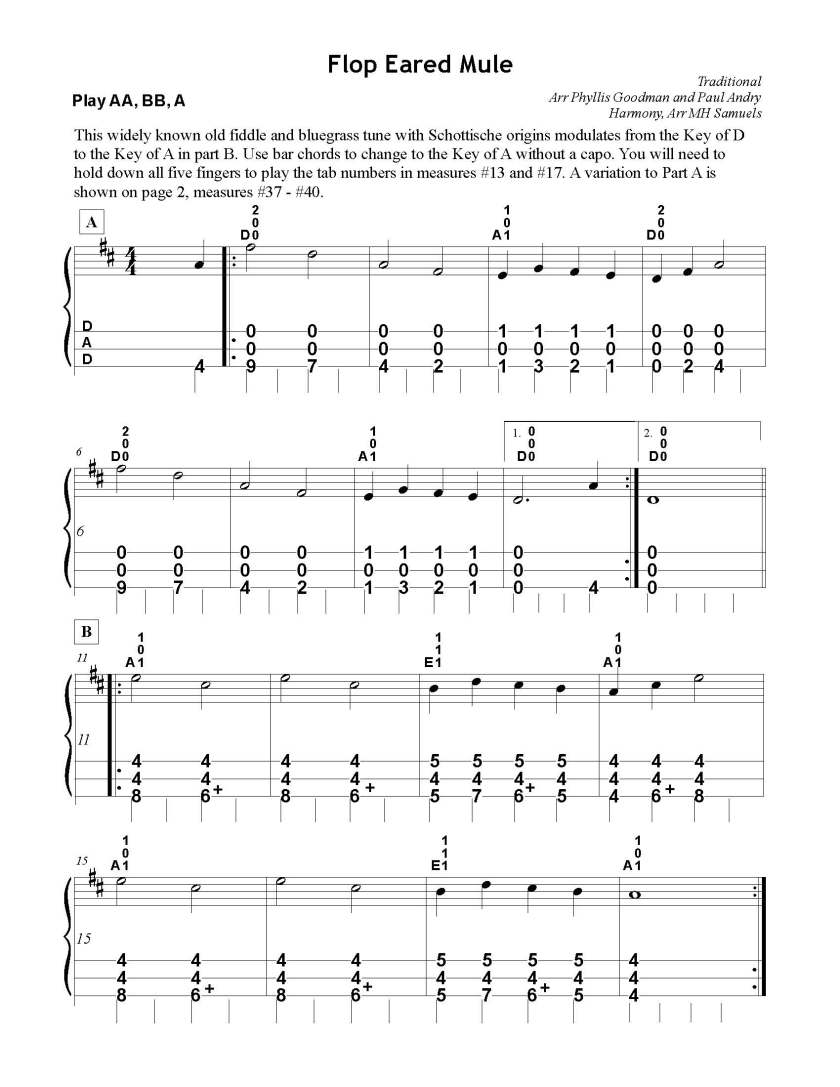 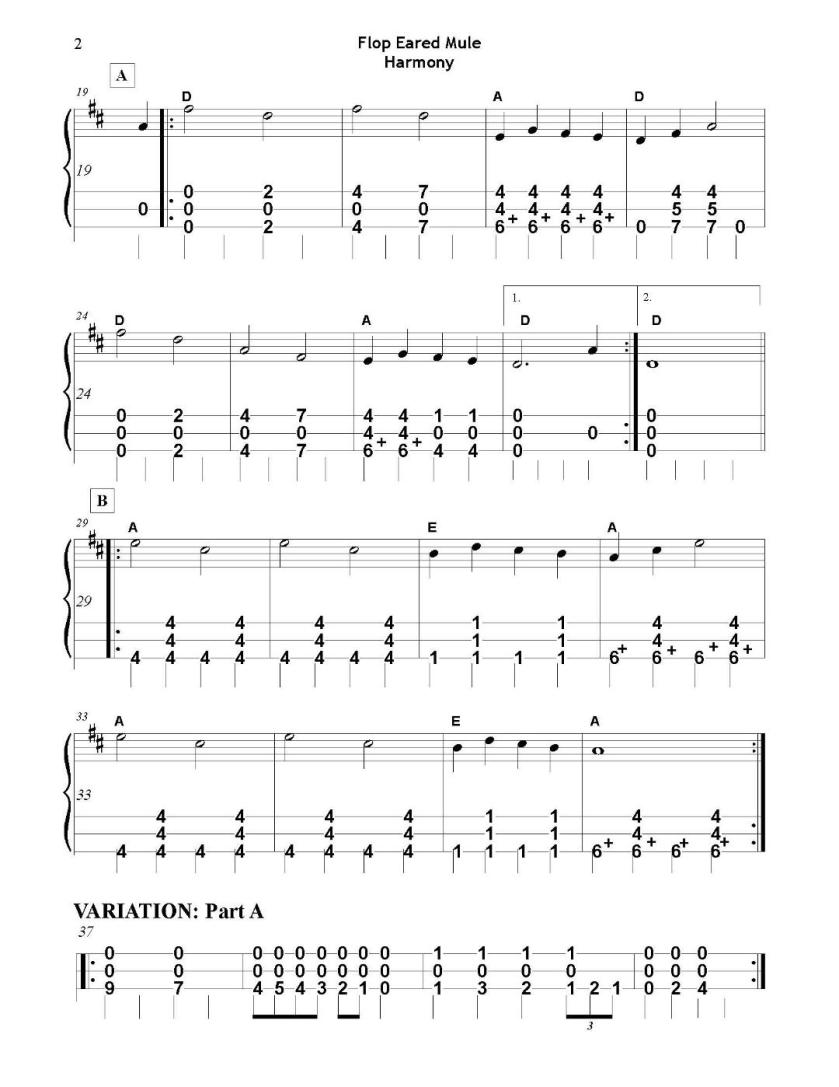 Here is a view of the Shenandoah Valley and mountains of Virginia. Many fiddlers originated in these mountains further down the state in Galax, Virginia, 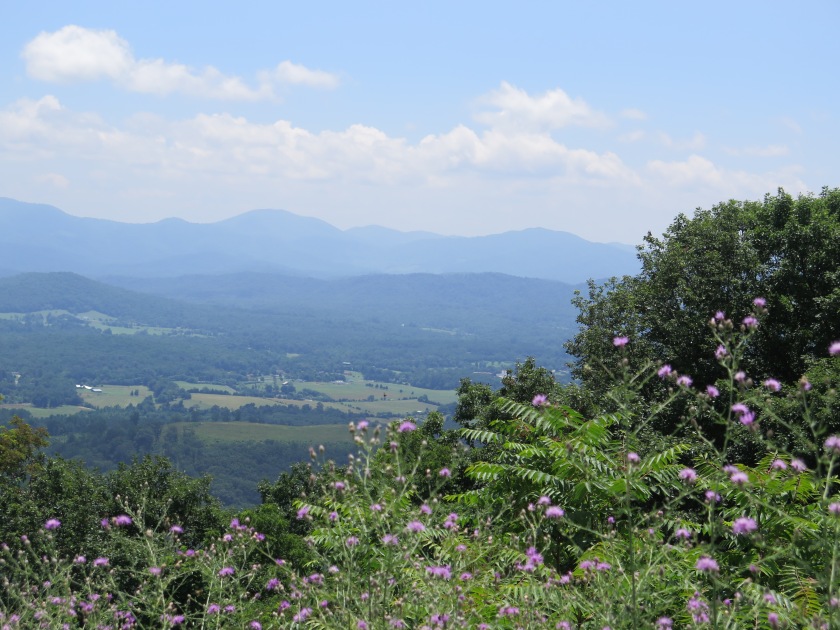